arjanwrites.com: Madonna "Give Me All Your Luvin'" feat. Nicki Minaj and M.I.A. (Video Review)

Madonna "Give Me All Your Luvin'" feat. Nicki Minaj and M.I.A. (Video Review) 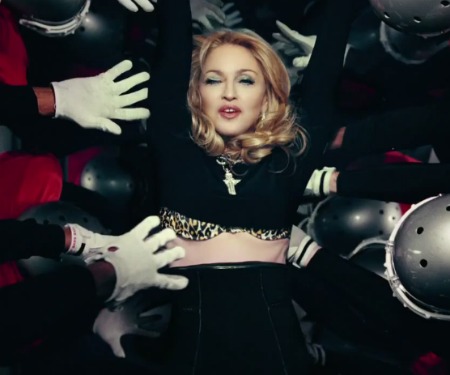 Madonna keeps it light and fluffy in the video for her new single "Give Me All Your Luvin'" that perfectly matches the fun and quirky qualities of the song. The Martin Solveig-produced single is not all that new to Madonna fans as an earlier version leaked a few months ago much to Madonna's dismay. The final cut of the song is pretty much the same track plus some polished raps of Nicki Minaj and M.I.A. who add some cross-over appeal to the song to conquer both pop and urban radio in the U.S.

The video of "Give Me All Your Luvin'" is clearly inspired by Madonna's much-hyped Superbowl performance and takes a few cues from her "Material Girl" past as well. Filled with hunky football players and wildly enthusiastic (and oddly masked) cheerleaders, Madonna works her way out of her suburban home, confidently stepping all over her adoring jock squad and letting them carry her through the dark city streets of a Hollywood sound stage. It's a scene not unfamiliar for those who remember the choreography in the "Material Girl" video. Even some of the camera angles are very similar.

Half-way through the video, Madonna makes a quick wardrobe change to meet her pals Minaj and M.I.A. in a downtown gentleman's club. They are laced up perfectly as Marilyn Monroe lookalikes, which is once again a clever nod to the "Material Girl" video and clearly an attempt by Madonna to poke some good fun at herself. There are a few other noteworthy references as well, including one to Madonna's Bay City upbringing with a big "M" for Michigan on the football players' jerseys. Also note the clever product placement of the Smirnoff voda brand that Madonna has an ongoing marketing partnership with.

After building a reputation for being controversial and pushing the envelope once in a while, it's surprising to see that Madonna decided to let the aesthetic of this video be guided by a mainstream, All-American sporting event. But then again, she's a savvy businesswoman and with the eyes of all of America on her half-time performance this Sunday, it only makes sense to fully leverage that opportunity to promote this new single.

Mixing up Stefani's "Hollback Girl," with Toni Basil's "Mickey" and Solveig's "Hello," "Give Me All Your Luvin'" may not be a giant artistic leap forward for Madonna, but this new musical baby is hella fresh, radio-ready and has a global appeal that helps usher in an exciting new phase in the icon's ever-evolving, unstoppable career.