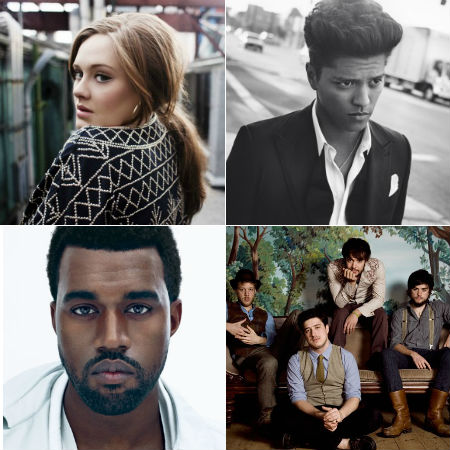 GRAMMY's Song Of The Year is one of the most prestigious award categories. It's dedicated to the songwriter(s) of a song that "must contain melody and lyricism and must be either a new song or a song first achieving prominence during the eligibility year. Songs containing prominent samples or interpolations are not eligible." In other words, it's a GRAMMY category dedicated to artists who produce original sound and original lyrics that can easily stand the test of time. Let have a look at the nominees and our favorite to win.

Kanye West "All Of The Lights"
While many raised eyebrows for the lack of a nomination in the Album of the Year category for Kanye’s "My Beautiful Dark Twisted Fantasy," there is no surprise about the nomination for the hit single "All Of The Lights" in the Song of the Year category. Written and produced by Kanye himself, the full orchestra sound supplies one of the heaviest and most melodic instrumentals of the year.  With additional voices that range from the legendary Elton John to the lead songstress of La Roux, Elly Jackson. The almost double platinum single has the goods, but will it take home the gramophone trophy?

Mumford & Sons "The Cave"
Sometimes the first single from an album isn’t necessarily the best or most popular, and no one has proven this better than the London quartet Mumford & Sons. Being released as the third single off their debut album "Sigh No More," "The Cave" is a mix of different styles that represent everything from folk-rock, to bluegrass. Produced by Markus Dravs, whom also was the producer for Arcade’s Fire GRAMMY-winning "The Suburbs," "The Cave" keeps the theme of the album by referencing classic writings with many undertone morals that appeal to all different kinds of musical listeners.

Bruno Mars "Grenade"
With the help his pals of The Smeezingtons, Bruno Mars' "Grenade" made a deep impact.  Taken from his debut LP "Doo-Wops & Hooligans," "Grenade" stood out next to it's more upbeat counterparts "Just The Way You Are" and "The Lazy Song." With touching lyrics describing the pain of love and a hypnotic piano riff that gave the song a low-toned edge, "Grenade"was not only a “personal favorite” for Bruno but The Recording Academy as well. While it still has a classical pop song structure, there is no denying that "Grenade" is one of the most soulful R&B records of the year.

Bon Iver "Holocene"
Written by front man Justin Vernon, this second single off the group's self-titled album is a smooth harmonious wave of chords and tones that has found its way to a well-deserved Song Of The Year nomination. Named after a bar in Portland where Justin had a “dark night of the soul,” the song gives a lyrical uplifting to those who are down and don’t feel special. From the band’s second studio album, it is Bon Iver’s first GRAMMY nomination along with nods in the categories Best New Artist, Best Alternative Music Album and Record of the Year.

Adele "Rolling In The Deep" (Predicted to Win)
While we won’t know if it’s the winner for Song of the Year until Sunday, we already know that this track was definitely one of the biggest songs of 2011.  Off her platinum-selling second album "21," "Rolling In The Deep" is the biggest crossover hit in America within the past 25 years and it's easy to see why. The bluesy/soulful track from the beginning draws attention to the deep and rich sound of producer Paul Epworth that sets the stage for a chorus that displays one of the most amazing voices and memorable melodies of the past decade. Not only is "Rolling in The Deep" a favorite for Song of the year, it’s hard to imagine Adele’s miraculous voice to not be a favorite in any category she is nominated in.

Who do you think will win and/or should win? Leave a comment or let us know onTwitter.