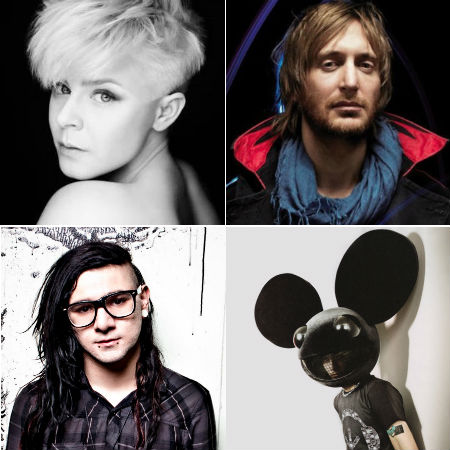 The GRAMMY for Best Dance Recording is a relatively new category that was first created in 1998. GRAMMY momentum for dance music has been building over the past few years, and this year the nominees for the category reflect The Recording Academy's respect and support for the genre. Whereas before nominees for this category included Boy George, Lionel Richie and Cher, the lineup now includes pure dance music artists rather than just pop artists that made crossover-dance tracks. So let's have a look at this year Dance Recording nominees and our prediction of who will take the top prize.

Deadmau5 & Greta Svabo Bech "Raise Your Weapon"
Deadmau5 is a name we’re all familiar with in the dance music world. From "Ghosts N’ Stuff" to "I Remember," Joel Zimmerman's production work has been top notch and it's good to see The Academy once again acknowledging his creativity. Greta Svabo Bech is the vocalist for Liverpool based band Picture Book and this is her first nomination. Deadmau5 was previously nominated for a GRAMMY in 2009 in the Best Remixed Category for "The Longest Road" (originally by Morgan Page). Deadmau5 received three nominations this year.

Duck Sauce "Barbra Streisand"
Duck Sauce is the DJ/production duo of Armand Van Helden and A-Trak. Individually, these two characters are absolute studs in the house music world. Van Helden has done some of the best remix work of his generation and A-Trak is a world-renowned DJ who most recently opened for Swedish House Mafia at their Madison Square Garden gig. "Barbra Streisand" is sampled off the 1979 disco song "Gotta Go Home" by Boney M. This record is actually pretty old, as it was released back in the summer of 2010 so I am little surprised to see it being recognized by the GRAMMYs. That being said, it was a huge hit and a modern-day Disco House classic.

David Guetta & Avicii "Sunshine"
These two guys are the present and future of dance music in the U.S. Guetta was the pioneer of dance music that helped hash out a radio-friendly formula for the American market while Avicii’s highly melodic emo house has ingrained itself into the ears of young America. "Sunshine" was released on Guetta’s ambitious two-cd release "Nothing But The Beat," a record that continues to place singles onto Top 40 radio (look out Katy Perry). With Guetta’s industry power and Avicii’s ever growing media presence after that incredible Super Bowl commercial, look for this one to cash in as a possible winner.

Robyn "Call Your Girlfriend" (Predicted to win)
An Arjanwrites.com favorite, Robyn is nominated for "Call Your Girlfriend," a track from 2010's "Body Talk" trilogy. Interestingly, another track from "Body Talk," "Dancing On My Own," was already nominated back in 2010 for Best Dance Recording that followed a GRAMMY nod in 2009 for her album "Robyn." The singer has been around the industry awhile and she achieved a critical and commercial breakthrough with "Body Talk." From performing at the MTV Music Video Awards and Saturday Night Live to touring with Katy Perry, the Swedish melody maker has truly had a monster year. This is a massively competitive categry, but with so much love from her peers (who make up The Academy and get to vote) and two prior nominations, this may be Robyn's year to finally get the love she deserves.

Skrillex "Scary Monsters And Nice Sprites"
In the dance music world, individuals can go from literally being no-one to an absolute superstar in twelve months.  There is no better example of this than Skrillex, the dubstep producer who, with a bit of melodic genius, turned club music on its head in 2011. Sonny Moore is nominated for 5 GRAMMYs this year and was even featured in a CBS promo video for the GRAMMYs telecast.  As dance music continues to ingrain itself in America’s cultural mainstream, it is this 24 year old Los Angeles native who is partially leading the charge.

Swedish House Mafia "Save The World"
Sebastian Ingrosso, Axwell, and Steve Angello. Three house music legends who when combined become the greatest dance music combo act since an early 2000’s Daft Punk. "Save The World" came on the heels of their monster 2010 singles, “One” and “Miami 2 Ibiza” and it did not disappoint. With a big chorus provided by fellow Swede John Martin, "Save The World" helped make 2011 the biggest year yet for these three outrageous Swedes.

Who do you think will win and/or should win? Leave a comment or let us know on Twitter.

About Steven Siegel
Post contributed by Steven Siegel, ArjanWrites.com's dance expert in-residence (and trusted camera man). Currently finishing up his senior year at Emory University in Atlanta, Siegel is a massive dance music fan and a budding DJ/producer who knows how to stir the party. You can listen to Steve's own productions on SoundCloud. Steve tweets at @steviesiegs.