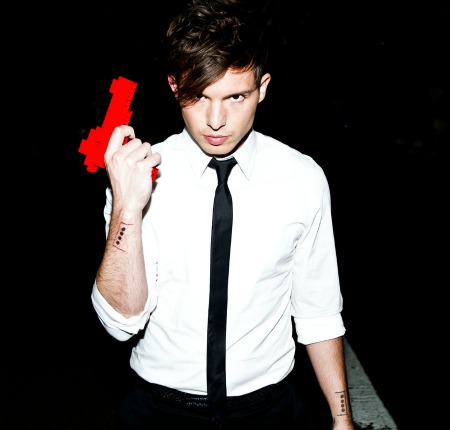 It's a big day for pop singer Simon Curtis. Not only did he relaunch his web site today, but he also unveiled a brand-new Vincent Did It remix of "Flesh," a track that first appeared on his most recent LP "R∆." But wait! There's more Curtis hotness finally being unleashed today that marks a Vincent Did It collaboration of a different kind.

Check out an exclusive download of "Starlight," an unreleased track that the singer originally recorded during the "R∆" studio sessions. It's a soul-stirring piano ballad that was produced by Vincent Did It (aka Vince Frank, formerly known to pop aficionados as Frankmusik).

Curtis is excited about finally sharing this very special track with his fans. "I wrote this song with Vince over a year ago," he writes me in an email today. "I was being approached by a label who 'wanted to hear more of my voice' in my music, so I went to his studio, he told me to sit back and let him do his thing. In fifteen minutes he'd written this beautiful, sweet piano piece. I started singing to it, we collaborated on the lyrics, and two hours later it was completely finished."

He adds, "I think this song went from 'ah I need to do a ballad!' to a finished song in about two and a half hours. I was sweating bullets as I was hopping on a plane to Uganda the next morning and knew I wouldn't have any time to finish it. It was really, really fast. I love working with Vince. He's so brilliant."

The combination of Curtis' heartfelt lyrics and intensely emotive performance with Frank's keen sense of melody turns out to be one of Curtis' finest. The singer explains that "Starlight" was inspired by a very personal experience. "I wrote [Starlight] about an incredibly special relationship, not necessarily a romantic one, as it began to end. The writing was on the wall and this song, in hindsight, predicted exactly how I would eventually feel about it over a year later. Probably how I'll always feel about this person, actually."

"Starlight" once again proves that the best pop happens when you combine meaningful, relatable storytelling with a powerful melody. This track delivers all that to the fullest, plus Curtis' stand out vocal performance is one to remember. It's fantastic that Curtis is finally sharing "Starlight." It's a gem and we're honored to be the ones brining it to you today exclusively and for the very first time.