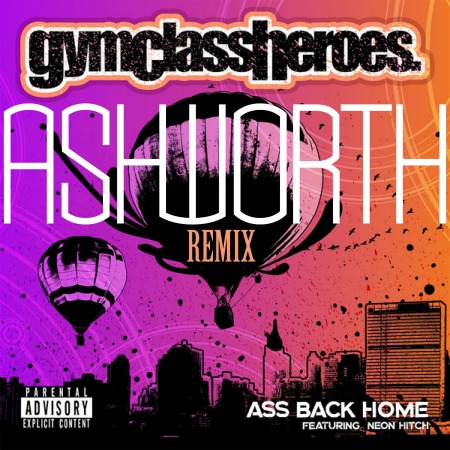 Pop fans should tune in pronto to the hot and happening sounds of newcomer Ashworth. The 20 year-old singer, writer and producer is making all the right moves after he produced a stomping remix of Maroon 5's chart-topping "Moves Like Jagger" last year. The remix was not only a fan favorite, but hit-maker Benny Blanco (who produced "Moves Like Jagger") was impressed as well, which sure is a massive compliment for the young upstart.

After remixing "Moves Like Jagger," Ashworth is back at it again with a blazing new remix of a Blanco-related tune. This time, the pop prodigy completely revamps Gym Class Heroes' "Ass Back Home," which was originally produced by Blanco, Ammar Malik and Robopop. Ashworth's kicky remake prominently shows off his forward soundboard savvy that perfectly blends his talent for vocal production, his knack for melody and his love for everything on the intersection of pop, dance and electronica. The instrumental freestyle that kicks in around the 3:40 mark is especially skillful and puts a whole new spin on the song.

There's no doubt that with a bit of time Ashworth will be ruling the pop charts with his own original productions and this remix proves exactly why. Mark my words. He's right on the pulse of where pop's heading.

Ashworth explains in an email to ArjanWrites.com that he's big fan of "Ass Back Home" and that he wanted to turn up the dancefloor sensibilities of the original. "I wanted to maintain its musicality but pump it full of adrenaline to give it some explosive, dance-crazed energy," he writes. "I decided to stay mellow where most vocals are present to preserve the lyrical and melodic power of the song, and let the music erupt during the drops."

Spoken like the expert that he is, Ashworth adds, "As for the structure of the chords under the remix; I wanted to give the song a new chord progression; to turn it darker and more minor, while staying within a key that the vocal melodies would sympathize with."

Check out Ashworth's remix of "Ass Back Home" below and make sure to grab the original here. Stay in the know about his emerging pop talent and follow him and Twitter and "like" him on Facebook.