arjanwrites.com: PopChange: Pop in Politics, and Why Some Do It Better Than Others

PopChange: Pop in Politics, and Why Some Do It Better Than Others 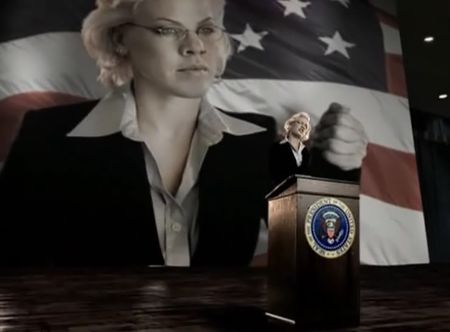 Super PACs, countless debates, open marriages and Kelly Clarkson? Oh my. It's safe to say the U.S. Presidential election season has heated up. Three separate candidates (Rick Santorum, Mitt Romney and Newt Gingrich) have each won one of the first three contests (Iowa, New Hampshire, and South Carolina, respectively) in the Republican race for the nomination. The only candidate still in the race who hasn’t been victorious is Ron Paul, the Representative from Texas. Not good news for Kelly Clarkson, who represented Texas well in another American popular vote, the first season of American Idol.

In December, Miss Clarkson took to Twitter to tell the world she loved Ron Paul. "I liked him a lot during the last Republican nomination and no one gave him a chance. If he wins the nomination for the Republican party in 2012 he's got my vote. Too bad he probably won't," she added.

There was talk that the semi-endorsement garnered her a sales boost. While not entirely true (sales of her most recent album, "Stronger," actually declined), figures for her album were stronger than others. According to Billboard, "while [Kelly's "Stronger"] moved from number 39 to number 17 on the Billboard 200 albums chart, its upward momentum [the week after Christmas] was caused by it having a less-steep decline in sales as compared to the rest of the titles on the chart (the overall album market was down 49% in the week after Christmas)." In the end, Kelly Clarkson's Presidential pick softened her post-Christmas slump most others didn't enjoy.

Remember when the Dixie Chicks (also Texan) harshly bashed then President George W. Bush in 2003? The country trio’s Natalie Maines told Londoners during a tour stop in the country, "Just so you know, we're on the good side with y'all. We do not want this war, this violence. And we're ashamed the President of the United States is from Texas." The Guardian published the quote on March 12, 2003, and it all went downhill from there. Sales of their records plummeted, demonstrations were held at which their albums were burned, and even fellow country star Toby Keith wasn't having it: a large image of Natalie Maines beside Saddam Hussein was displayed during one of his performances.

P!nk sided with the Chicks, you could say. She didn’t endorse their words, but she, too, was super critical of President Bush.

In 2006's "Dear Mr. President” off of her fourth album "I'm Not Dead," P!nk delivers an open letter to Bush in what she calls “the most important song I’ve ever written.” She challenges the President on issues from gay rights to war to poverty, and calls him out on his past including alleged substance abuse struggles. It's clear the frequently outspoken singer's take on the President was received tons better. The most viewed clip of the song on YouTube (above) has been viewed over 15.6 million times, and has 96% positive feedback (33,276 likes to 1,367 dislikes).

Then you have the flood of pop stars who have publicly supported Barack Obama. Among them: Beyoncé. The "Run The World (Girls)" pop icon (yes, icon) has not only shown support, but has actually teamed with the Obamas on a national youth health and fitness program, Let’s Move. She’ll certainly have his back during the 2012 election, already having designed a shirt for the President’s re-election fundraising campaign, on sale now.

Should it be happening? Do pop and politics really mix? Yes, if done right. It really comes down to execution and delivery. It's a PR game. Politics is no joke, and you don't want to come off like a careless fool.

Do not: Casually share your support for a candidate with no faith in his success and without a well thought out reason on a public forum where backlash is one click and 140-characters away.

Do not: Blast the President on a global level when his public approval at home is high (or good enough).

Do: Blast the President by challenging his actions in a well thought out song when his public approval is low.

Do: Align yourself with a candidate of your choice by actively participating in an event and/or campaigning for an issue that makes sense for your already established celebrity.

At the end of the day, pop stars have a right to share their opinion and it certainly provides candidates with the extra exposure. But Ron Paul is still trailing, George W. Bush got re-elected anyway, and ain't no Beyonce-designed Obama shirt going to sell enough to fix the economy. If picking a side pleases the artist, they certainly have the right to. But if you’re not going to think things through--like we all should be when cast a vote--and aren’t ready for some good ol’ backlash, don’t be silly and just shut up.

What are your thoughts on pop in politics? Let us know on Google+. Waiting impatiently to follow in Kelly’s footsteps to vote for Ron Paul or another candidate. Make sure to register to vote. Learn more at MTV's Power of 12.