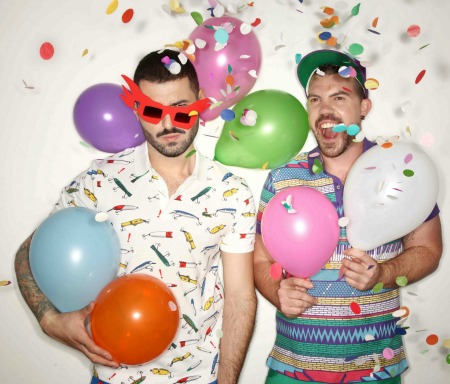 After releasing their debut single "Stay In Touch" and some great remixes last year, studly Aussie synth pop duo Garcon Garcon is getting ready to unleash a brand-new EP next month with a bunch of new tracks. Check out a sample of the brand-new "Take Me Out" that you can stream exclusively on this blog.

The duo has shared earlier demo versions of "Take Me Out" on their Facebook page, but a spick-and-span final version will be included on their EP. Garcon Garcon's EP, simply entitled "EP," will be released globally in a digital download store near you on February 14 just in time for Sydney's crazy fun Mardi Gras.

The group's Nathan and Nick talked to me at length about this new "Take Me Out." They explain that the song was one of the first songs they worked on together. "It was really the beginning of our sound and set the tone for what Garcon Garcon would become." Nick says, "Creating the song was such a catalyst for our musical partnership and it really sums up pretty much everything we want to communicate with our music."

Nathan adds that he wrote the song after he returned to Sydney from overseas and wanted to plug back into the scene. "It's all about being in a new city, going out, meeting people, trying to connect, dating and finding your way in a new place," he explains.

Nick elaborates and talks a little more about the creative process that fueled "Take Me Out." "It was such an interesting process making this track because we didn't really know what direction it would take us, so there were no rules." He admits, "It''s a really nostalgic song for me, brings back a lot of memories of moving to the big city in my teen years, all starry and ready to take on the world."

They conclude, "We are mega excited to be sharing this first snippet with everyone." And so are we! "Take Me Out" is a beautifully melancholic and uplifting tune that will sure please their growing following of fans everywhere, plus it's an excellent tastemaker for "EP." (Garcon Garcon photo by Elvis Di Fazio)