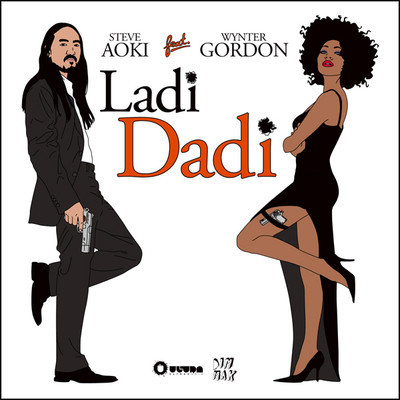 Steve Aoki's forthcoming artist album "Wonderland" is shaping up to be one of the hottest dance releases of 2012 that includes collaborations with people like Rivers Cuomo, and hot up and comers like Kay and Wynter Gordon. In anticipation of that album release, Aoki released a special club version of his new single "Ladi Dadi" today that features the glowing vocals of pop crooner Wynter Gorden. This cut of "Ladi Dadi" is a prequel to the album version.

Gorden adds a welcome soulful vibe to the blazing dancefloor stomper that includes a massive dubstep drop that sure will please Aoki's hard-core fans. Aoki writes, "I wrote a whole new dubstep drop that is dirty and simply nutty. Starts off with the four on the floor leading you into the heavy bass chorus then right into the vocal hook and does it all over again." He adds, "This track has been one of my secret weapons in the past months."

As great it is to experience more new work from Aoki, it is also pretty darn exciting to hear Wynter Gordon make an appearance again. Her "With The Music I Die" was one of the most striking new pop releases this year that put Gordon in pole position for success in 2012. Her full-length debut LP cannot come soon enough as I'm concerned, and I'm especially very curious to hear what's has been cooking up with pop man Starsmith and Aussie DJ duo Nervo on her album.

In preparation of a national tour early next year, Aoki has been using some of his free time to film a bunch of music videos for "Wonderland" in advance. Two weeks ago, I was on the set of his video shoot with rising Canadian pop sensation Kay in Los Angeles (directed by DJ Skeet Skeet) that is going to be a totally fun video. Look out for that and in the meantime, check out Aoki's collaboration with Wynter Gordon.