Ellie Goulding To Release "Live At Amoeba" Through Indie Retailers 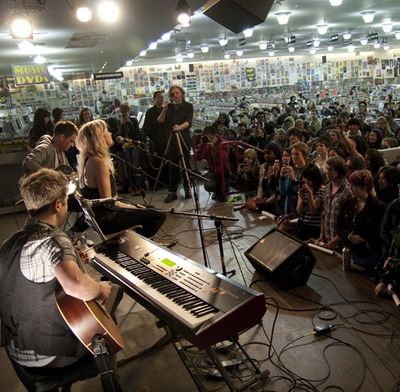 British songstress Ellie Goulding is set to release a very special EP disc, entitled "Live At Amoeba," exclusively through independent retailers on November 25 on Record Store Day in the U.S. It's a fantastic initative that is Goulding's way of supporting independent music retailers who have struggled in recent years to compete with digital music distributors like iTunes. (Find an independent record store near you here.)

The EP features live acoustic performances of Goulding hits "Starry Eyed" and "Lights" (currently climbing up the Hot AC radio chart), plus a cover Elton John's "Your Song" that was a massive smash in the U.K. last year. The performance was recorded earlier this year at the legendary Amoeba Music record store in San Francisco while Ellie was on the road for her first U.S. tour.

To celebrate the EP’s release, Ellie will return to Amoeba Music in San Francisco to sign advance copies on November 20. This in-store event begins at 5 p.m.  If you can’t make it to the signing, you can order an autographed copy from Amoeba’s website.

In related Ellie Goulding news, the singer will perform five arena concerts with Katy Perry this month, including shows at Madison Square Garden in New York City and The Staples Center in Los Angeles. Ellie will also perform at this year’s Nobel Peace Prize Concert, along with Sugarland, David Gray, Jill Scott, Janelle Monae, and Matthew Morrison, on December 11th in Oslo, Norway. Click here for more information about this event that will be broadcast in 130 countries.