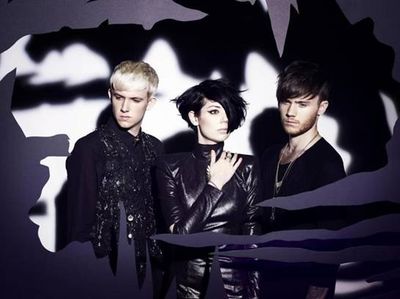 In conjunction with the release of their debut EP "Skeleton" this week, rising U.K. electro-pop sensation The Good Natured also annouced that they will be playing their first U.S. tour in January. Tour cities include New York (January 16), Brooklyn (January 17), San Francisco (January 19) and Los Angeles (January 20).

In anticipation of those tour dates, make sure to check out the excellent "Skeleton" EP that was expanded to 7 tracks for the U.S. market and features the songs from the band's acclaimed U.K. EPs "Skeleton" and "Be My Animal" plus a bonus remix.

Fronted by the beguiling 20-year old singer and principle songwriter Sarah McIntosh, The Good Natured is the teaming of Sarah's brother Hamish on bass and George Hinton on drums. Pivotal tracks on "Skeleton" are its title track and "Wolves" that were produced by none other than Patrick Berger who previously produced Robyn's "Dancing On My Own."

This new EP once again shows off McIntosh development as a songwriter, displaying her mature command of serious pop music infused with sensual and emotional content that drives her lyrics. The title track "Skeleton" packs a raw passion with its frenetic rhythm section and glossy chorus that is nothing less than sheer brilliance. It's a perfect balance between sweet and crunchy. It's pop you gotta chew on to get the full flavor. You can stream "Skeleton" in its entirey on Rdio.com.

Below check out a Cherrytree Pop Chop Minute interview that was filmed at South by Southwest back in March when The Good Natured made their U.S. performance debut.