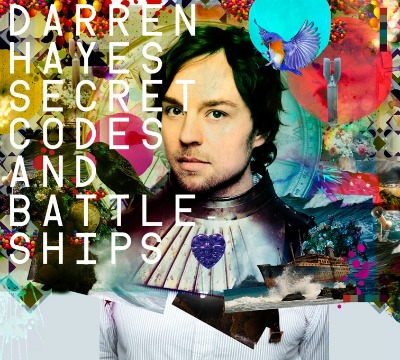 When I recently spoke with pop singer Darren Hayes in Sydney he described his new album, titled "Secret Codes & Battleships," as "a masterclass of all the songwriting and producing" that he has learned over the last two decades. The result is one of his finest pop efforts to date that will appeal to a wide variety of audiences.

Stay tuned for more of Hayes' in-depth video commentary about the album and his inspiration very soon.

Introduced by the singles "Talk Talk Talk" and "Black Out The Sun," the star's new album will be released on October 25. To give fans a taste of what's to come he released an extensive album preview with clips from the record on YouTube this morning.

Recorded around the world from Stockholm to Los Angeles and Sydney, Darren collaborated with people like mixer Robert Orton (Lady Gaga), Carl Falk (The Wanted, Nicole Scherzinger) Phil Thornalley (Pixie Lott, Natalie Imbrugila), Steve Robxon (Taylor Swift, Take That) and his old pal Walter Afanasieff with whom he worked on his Savage Garden albums and his first solo record.

A press release explains what people can expect from this record. "The album is a deeply personal journey from despair to hope, and as with all journeys, there's a beginning, a middle and an end." Listen to the album preview after the break and get familiar with songs like the string-laden "Talk Talk Talk," the spine-tingling "Hurt" and "Don’t Give Up," which touches hearts and tightens stomachs with the melodic flair and searing honesty that is Darren's calling card.

One of the album's highlights is the emotive and perfectly delivered "Bloodstained Heart" that concerns the "worst day of the worst month of the worst year, but it says I will pick up your pulsing, bloodstained heart from the gutter and we will get through this, together." "Cruel Cruel World stems from a time Darren "was in LA feeling so lost and disjointed I just wanted to crawl home."

Listen to all the tracks after the break. Pre-order "Secret Codes & Battleships" on iTunes in the United States, United Kingdom and Australia.