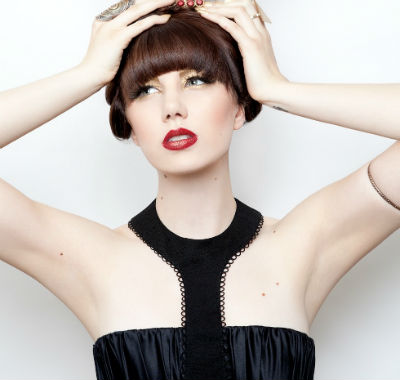 Earlier this month, I introduced you to Queen of Heart's brand-new "Spanish Sahara" that she worked on with producer Dreamtrak. The emerging British singer has been working with a slew of other forward-thinking pop hitmakers as well to further to develop her mesmerizing synth pop sound.

Some of her collaborators include people like Stuart Price, Sounds of Arrows and Monarchy. Interestingly, this line up of top-notch writers and producers mimics the list of people that Madonna is allegedly working with for her new album. Whether that is true or not, it sure sounds like Queen of Hearts is on the pulse of where electro pop is heading next.

One of the people that Queen of Hearts has been writing with is Beatrice Hartherley. She co-wrote Kylie Minogue's "Closer" that was included on the pop singer's most recent album. Hatherley and Queen of Hearts co-wrote the track "Black Star" that is exclusively premiering here on ArjanWrites.com today.

Produced by Shoreditch duo Devil's Gun, "Black Star" is a buzzing slice of nocturnal electro-pop with very subtle (and tasteful) dubstep stylings and a dark, grimy bassline that neatly balance out Queen of Heart's sweet and polished vocals. This tune delivers a firm punch that may leave you light-headed but most certainly impressed and anxious for more.