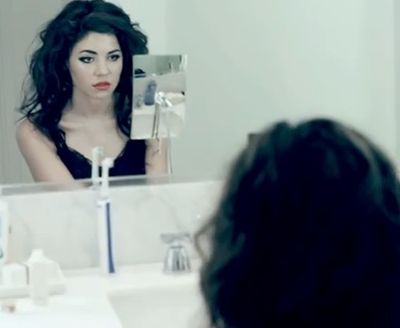 British pop singer Marina & The Diamonds pops back onto the scene with some brand-new music today. Check out the brand-spanking new "Fear & Loathing" that the singer uploaded to YouTube this morning.

"Fear & Loathing" is part of a two-part video installation, titled "Electra Heart," a music and video concept that "epitomises and embodies the lies, illusions and death of American ideologies involved in the corruption of self," according to a note of Marina. "Fear & Loathing" is the first part of "Electra Heart," and the second and final part will be released next week Monday.

The theme of "Electra Heart" seems to continue where "Hollywood" left off. After addressing the concept of fame and people's blind pursuit to achieve it, "Electra Heart" is a critical and candid look at our materialistic and self-centered society that is so eloquently told and beautifully sung by the British singer. In many ways, the song and delivery echoes the poignant storytelling and point of view of Tori Amos.

Marina argues in "Fear & Loathing" that materialism does not lead not to happiness. Instead, it shuts people down and gets in the way of making real connections with others. While performing the song in this new video, Marina cuts her hair looking in a bathroom mirror to set herself free from the past and start anew.

Pointing to issues of trust, cynicism and the obsession of always wanting more and never having enough, Marina sings "Not every one wants to screw you over, maybe they just want to get to know you." She adds, I'm done with trying to get it all, and ending up with nothing much at all."

She concludes with a call to action, "Baby, you don't have to live you life in fear, the sky is clear, clear of fear. I don't want to live of fear and loathing."

It's a powerful message that is drenched in Marina's touching piano balladry that is intensified by her pitch-perfect falsetto, which may light a fire and get us to think. But above of all,"Fear & Loathing" is a lasting testament to Marina & The Diamonds' non-conformist pop star ways that is refreshing and one of a kind.