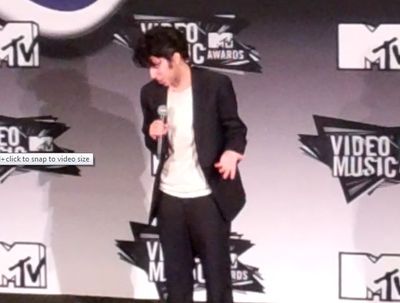 Even though I wrote "Lady Gaga" in the title of this blog post, I really meant Jo Calderone because Gaga was conspicuously missing from the MTV Video Music Awards last night. Instead the pop superstar sent Jo Calderone to pick up her awards for Best Pop Video and Best Female Video. So who is Jo Calderone? Watch Jo introduce himself to the media backstage. He is from New Jersey and from Italian descent. But don't call him a guido who got lost on the Jersey shore, because that will tick him off big time. Watch it all go down after the break. Raw and unedited footage from the VMA Media Room.