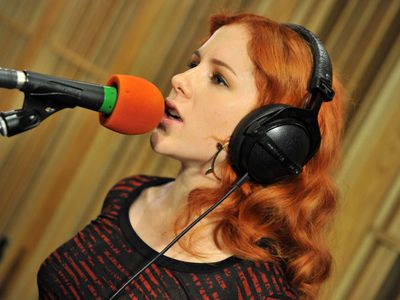 Katy B stopped by the BBC Radio One studios yesterday to perform a few songs from her excellent debut record "On A Mission" for BBC's Live Lounge. It's a fantastic set and I particularly love her soulful, acoustic spin on the grimey "Broken Record" that shows that Katy B has some powerful vocal chops.

Still new in the U.S, Katy B is absolutely no stranger to pop fans overseas. "On A Mission" was a smash success and included three top ten U.K. singles that received over 22 million combined views on YouTube. That's sure is not too shabby if you're only just getting started. After all that success in the U.K., Columbia/Sony Music is now preparing to release of Katy's album stateside.

Look out for her U.S. debut single "Katy On A Mission" on a radio near you soon. Produced by Croydon dubstep producer Benga, "Katy On A Mission" neatly introduces her funky brand of pop that fuses clever hooks, a wholesome presentation and a soulful delivery that is mixed up with the grime of the London underground scene that is taken the world by storm.