Pop culture historian Matthew Chojnacki rightfully argues that "the 1980s were the most visually provocative era of the last millennium," which was reflected in the way music was branded and marketed. Every new vinyl single that hit the stands was wrapped in eye-catching sleeves to incorporate the latest trend and taste of the moment.

With the surge of digital music in the last ten years, there has been less emphasis on packaging music and more on creating killer videos and flashy web sites. To celebrate the great music art of the past, Chojnacki has compiled a meaty guide to 7- and 12-inch vinyl single artwork from the '80s.

In his book Put The Needle On The Record, he presents and compares more than 250 vinyl single covers, representing nearly every prominent musician of the decade. The book not only features the iconic images, but also the previously untold stories behind the images from the designers and visual talent behind Madonna, Prince, Adam Ant, Pink Floyd, Queen, The Clash, Pet Shop Boys, Kate Bush and more.

Chojnacki also interviewed a number of artists to get the story behind the single art, including Annie Lennox, Duran Duran, Run-DMC, Gary Numan, The B-52's, Erasure, OMD, Scorpions, The Knack and Yoko Ono. The book also contains a foreword by Jake Shears of Scissor Sisters and an afterword by Nick Rhodes of Duran Duran.

Chojnacki is a long-time reader of ArjanWrites.com and wanted to share one of the book's pages exclusively with you. I selected his review of Madonna's iconic "Into The Groove" single cover. See and download it after the break. (Pre-order Put The Needle On The Record on Amazon now.) 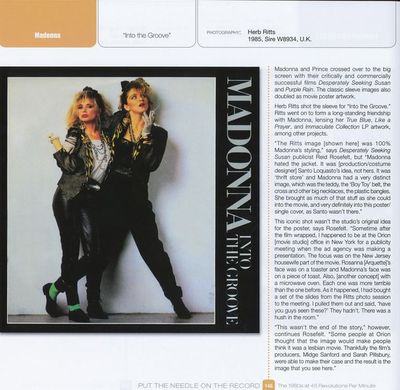