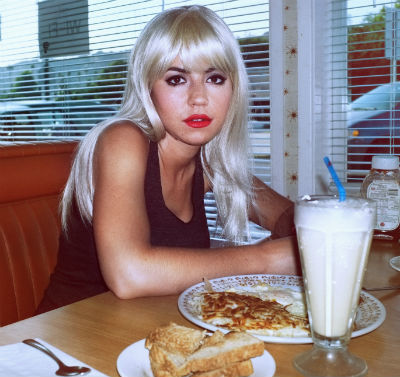 Earlier today, Fearne Cotton in the U.K. premiered Marina & The Diamonds' much-anticipated new single "Radioactive" on BBC Radio One. Her press team was quick to follow up with new press photos and the fantastic sleeve art for the single that follows tastemaker tune "Fear And Loathing."

Set to a big room, throbbing electro beat and sizzling synths, the song is a drastic departure from Marina's previous piano-driven, alt-pop stylings. It's a big dance-pop anthem that was produced by none other than Swedish hitmakers Stargate who have produced megahits for people like Rihanna, Katy Perry, Beyonce and many others.

"Radioactive" is one of those tracks you'd think would never happen. The idea of mashing Marina's rebellious point of view with the contemporary dance-pop stylings of Stargate seemed far-fetched. But now that it has actually happened, it kinda blows my mind. The teaming of Marina and Stargate is not only unprecedented but also pretty extraordinary, and quite frankly, brilliant.

Some will call "Radioactive" genius while others will quickly dismiss it as a total sell out. The truth is that "Radioactive" is hardly a poor or lazy attempt to please the masses. Working with big hitwriters must have posed a major creative challenge for Marina who could have easily been swallowed up by Stargate's slick, dominant sonics. Instead, she stayed true to her idiosyncratic delivery and lyrical intent that have not been affected by the soundboard gloss of the people that help craft it.

Deliberate and with a lasersharp focus, "Radioactive" paints a fascinating metaphorical picture that reflects the singer's ongoing obsession with American culture. Instead of serving up an antidote to the pop sound that is the epitome of the American mainstream, Marina opted to play around with it and incorporate it in her new music to give meaning to the point she wanted to get across.

Lyrically, she amplifies the theme of her thinking by using words like "fake," "empty," "fear," "cold," "burning," "melt-down" and "nuclear" to describe the vapid cultural wasteland she believes much of America to be. In fact, in many ways the song and its video is the perfect reflection of her love-hate relationship with America that she continues to be inspired by.

Hail to Marina and The Diamonds for surprising listeners and for creatively challenging herself to serve up something new while still consistently staying true to her distinct artistry. Watch the video for "Radioactive" after the break.