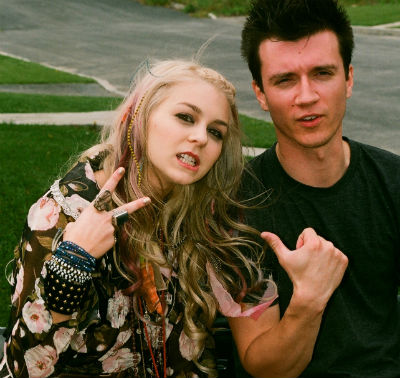 Stalwart DJ and dance producer Richard Morel adds some spit and shine to Frankmusik's new single "No ID" that is a duet with Cherrytree Records label mate Colette Carr.

The track is taken from Frank's forthcoming new album "Do It In The AM" (available September 27) that not only features this teaming with Carr but also collaborations with Natalia Kills and Far East Movement, two other buzzing Cherrytree Records artists. Yeah, thats' right. "Do It In The AM" sure is shaping up to be a poppin' family affair.

The spick-and-span "No ID" is an instantly catchy pop gem that not only shows off Frank's pitch-perfect and flawless vocals, but also his incredibly fine knack for producing hyper-melodic tunes. The song also gives listeners a bit more insight into the pop versatility of Colette Carr, the reiging princess of Malibu.

After hopping onto the scene with her hip pop banger "Back It Up," the spunky Cali artist is now confidently morphing into an all-round pop artist. She forged a powerful bond with Frankmusik and together the two have been writing and recording a bunch of new tracks for Colette's forthcoming debut LP. We already got a taste of Colette's evolving sound when she released the Frank-produced "We Do It (Primo)" and now "No ID" helps to further shape our expectations.

Be in the know early, and check out Morel's sleek revamp of "No ID" plus the original single edit of the tune after the break.