arjanwrites.com: [FIRST LISTEN] Erasure "When I Start To (Break It All Down)" (Prod by Frankmusik) 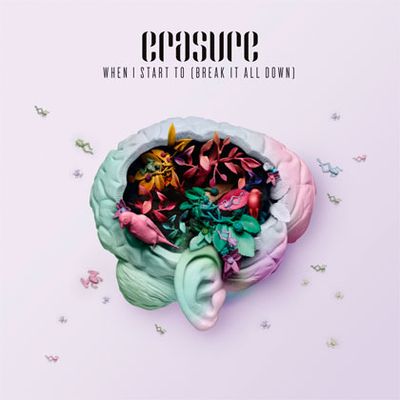 Erasure's much-anticipated new single "When I Start To (Break It All Down)" finally premiered on BBC Radio 2 this morning. This excellent new track is taken from the group's forthcoming new LP "Tomorrow's World" that will be available in October and marks the band's first album in more than four years. This new LP follows singer Andy Bell's solo stint with "Non Stop" and a reunion of keyboard player Vince Clarke with former Yazoo partner Alison Moyet for a brief tour.

"Tomorrow's World" was written in New York, London and at Vince Clarke's cabin studio in Maine with none other than electro pop wunderkind Frankmusik who produced the album. And according to a press release, the result is set to be "a collection of electronic songs that sound totally contemporary and classic at the same time."

The new "When I Start To (Break It All Down)" is a fantastic pop production that combines Erasure's timeless delivery with Frankmusik's savvy soundboard spunk. In fact, the vibrant track has Frankmusik written all over it with its joyous, uplifting sonic stylings, sparkly dance groove and the song's richly melodic, soaring middle eight that is a Frankmusik trademark. Frank even applied just the right amount of soundboard processing to Bells' vocals that take his classic choir boy vocals to a whole new level of pop euphoria.

The song was mixed by none other than GRAMMY award winner Rob Orton, the incredibly talented engineer who has one of the finest ears in the business. He previously mixed tracks for artists like Lady Gaga, Kelis, Robbie Williams, Darren Hayes, Backstreet Boys, t.A.T.u, The Police and Pet Shop Boys

With the help of Frankmusik, "Tomorrow's World" underlines that the futurist, electronic sound that Erasure has championed since the early '80s is more relevant today than ever. Make sure to see Erasure on tour in the U.S. with Frankmusik this upcoming September. Erasure's "When I Start To (Break It All Down)" will be released on September 26. Listen to the track after the jump.