arjanwrites.com: [EXCLUSIVE] NERVO "We're All No One" (feat. Afrojack and Steve Aoki)

[EXCLUSIVE] NERVO "We're All No One" (feat. Afrojack and Steve Aoki) 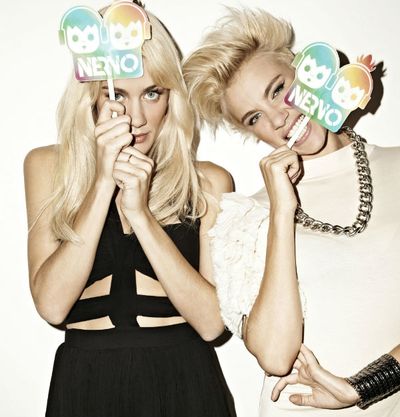 What immediately struck me about Australian sisters Liv and Mim Nervo when I first met them was their instantly infectious energy. When they talk about dance music, club culture and their music, their eyes light up along with big smiles that is quite frankly impossible to ignore. NERVO lives and breathes club music and they have a tireless passion for stirring the crowd with their soaring dance beats.

American pop fans have gotten a steady dose of their energy for the past few weeks when the group was a special guest on Britney Spears' massive Femme Fatale tour. But NERVO is hardly new to the scene. In fact, their accomplishments reach far beyond their loyal dance following. Liv and Mim are not only talented DJs, but also astute songwriters and producers.

Most notably, the sisters wrote and vocally produced four tracks on David Guetta's GRAMMY-nominated album "One Love" including "When Love Takes Over" featuring Kelly Rowland. Their other long list of songwriting and production credits include work for Ke$ha, Pussycat Dolls, Kylie Minogue, Cheryl Cole, Sophie Ellis-Bextor and Miley Cirus. Plus, they worked with a slew of powerhouse DJs like Roger Sanchez, Armin Van Buuren, Deadmau5, Kaskade and Laidback Luke who all turn to NERVO to add some sass and sizzle to their work.

But after helping other people climb to the top of the charts, NERVO is now gearing up to strike out on their own and step into the limelight with their debut artist single, titled "We're All No One," that is getting its exclusively online premiere on ArjanWrites.com today. The song will be released to iTunes and other digital stores next week.

The best thing about "We're All No One" is that the song doesn't rehash NERVO's existing success by going for the tried and proven. Liv and Mim set out to do something new and exciting for their debut.

The song marks an adventurous new direction for the two who are performing the lead vocals on the track and introduce a bold, progressive dance-pop sound. They worked on the tune with chart-topping pals Afrojack and Steve Aoki who bring a perfect balance of radio-savvy club beats and unorthodox production stylings to the song.

Slightly quirky and totally fun, "We're All No One" is dominated by its hands-in-the-air, anthemic pop chorus featuring NERVO's playful top line and commanding vocals that capture the duo's brash energy and rebellious spark. "We're all no one until someone thinks that we're someone. Until then we are no one," Liv and Mim sing, adding some lyrical fire to the forward production of the song.

Look out for NERVO's full debut album soon that also features collaborations with Avicii and Timbaland's right-hand man Danja. Until then, enjoy their new single and make sure to catch them on the Identity tour later this summer. Listen to "We're All No One" after the break, plus watch my recent tour bus interview with Liv and Mim Nervo.