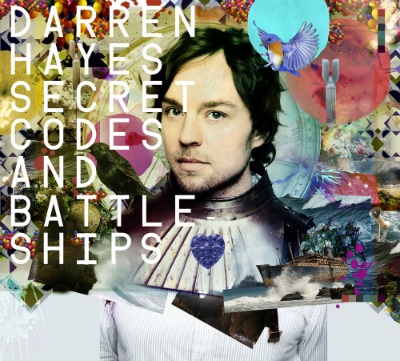 Darren Hayes is one of the biggest '80s geeks I know. The Aussie pop singer is obsessed with Star Wars, is a collector of vintage vinyl and he's still as fanatic about Madonna, Prince and Michael Jackson as he was back in the day. He just can't get enough of that stuff. In fact, he wrote a song about his love for the '80s that sums it up quite nicely.

Hayes told me in a recent chat that the artwork for his much anticipated new album "Secret Codes & Battleships" (another geeky reference to his '80s upbringing) was partly inspired by Michael Jackson's "Dangerous" LP art and the King of Pop "Leave Me Alone" video.

The beautiful art for "Secret Codes & Battleships" was designed by John Gilsenan and took over 12 months to finalize. A press release describes that Hayes was impressed by John's work on Tracey Thorn's "Into The Woods" album and his campaign for The Script. "I was looking for someone capable of making an album cover that was a piece of art - and one that you could get lost in," Darren explains.

The pop singer asked photographer Ellis Parrinder to photograph him in armor and various objects borrowed from the Royal Shakespeare Company to create a virtual word to surround the singer.  "John developed a code, a series of symbols – even a bespoke font and then combined all of this with Pollock-like paint overlays and hidden layers – all of which work their way through the theme of the artwork and videos on the album," according to a official description.

Darren adds,"My album is about being lost on a journey to find your true happiness - and about the war between lovers and their struggle to stay together in a world that just wants people to break up. It's about all the things we dare not say to each other but having the courage to do so. There's a lot going on in the music and that's why this was the only cover I could have imagined for 'Secret Codes and Battleships."

Stay tuned for the video interview with Darren soon. In the meantime, grab his excellent remix EP for new single "Talk Talk Talk."