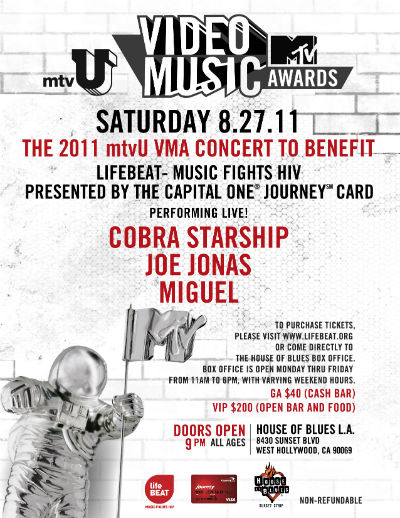 Lifebeat continues it annual tradition of teaming up with MTV to organize its annual VMA bash on the eve of the big Moon Man parade. This year, the Lifebeat VMA party will be hosted in partnership with MTVu and features performances by none other than, yes!, Joe Jonas, Cobra Starship and Miguel. The event will be held at the House of Blues in West Hollywood this upcoming Saturday.

Lifebeat's annual VMA concert highlights the non-profit's primary mission to use the power of music and the music industry to help educate young people about HIV/AIDS prevention. For more than seventeen years, Lifebeat has helped to mobilize the talents and resources of the music industry to raise awareness and funds, and to provide support to the HIV-positive community. It's an important cause that should not be forgotten about.

In conjunction with the VMA concert, Lifebeat is also hosting a celebrity auction where you can bid on special LifeBeat VMA VIP packages, meet & greets and VMA tickets. Click here for details.

Contest & Rules: ArjanWrites.com is giving a away 1 (one) pair of General Admission tickets to Saturday's Lifebeat VMA concert.If you'd like to have a chance to win, head to Facebook and simply "like" this announcement. A winner will be randomly selected from the likes, and the winner will be contacted via Facebook. The winning tickets will be available at the box office. No travel is included. This contest is for event tickets only. Contest ends on Thursday at 6PM PDT.

While you're liking this announcement and telling all your friends about it, you must make sure to also like Lifebeat's Facebook Page and follow them on Twitter. It's an important cause that needs all of our support.