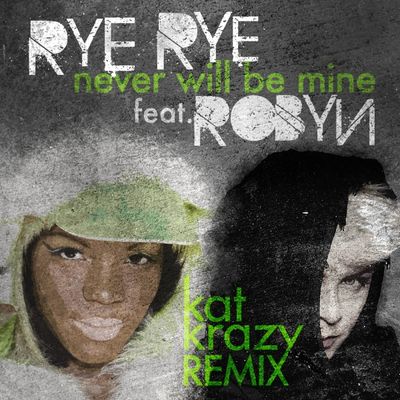 After it leaked a couple of weeks ago, Kat Krazy's excellent remix of Rye Rye's "Never Will Be Mine" (featuring Robyn) was released in digital download stores this week for fans to grab. Kat Krazy previously produced some great remixes for artists like Far East Movement, Chipmunk and Talay Riley, and now he put his skill to work to create a dancefloor-ready version of the heartfelt hip pop ballad.

Like I wrote before, Kat Krazy has found a way to give the tender and delicate original an exciting new twist. He added a propulsive new groove and soaring sunburst synths to create a mighty, hands-in-the-air dancefloor filler that maintains the song's powerful emotive quality. And best of all, it doesn't interfere with the original's beauty but just extends its reach into an exciting new direction. Highly recommended. (Download Kat Krazy's remix of Rye Rye ft. Robyn "Never Will Be Mine" on iTunes or take it everywhere on Rdio.)