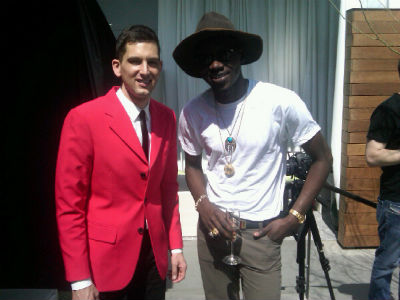 Chatting with Theophilus London at SXSW

With his debut album now only a week away, Brooklyn's hip and happening Theophilus London continues to deliver some exciting free new track to stir up anticipation. Check out a totally-guilt free download of "I Stand Alone," the first single of his debut album "Timez Are Weird These Days."

Reminiscent of the classic sound of The Police, "I Stand Alone" further completes the picture of London's unique and all-inclusive brand of pop. He taps into the great colorful hip hop aesthetic of the past and injects it with contemporary electro and dance stylings to create a pop alternative style of his own that can easily be embraced by the Playlist Generation.

London tells Wired.com that "I Stand Alone" is his favoritetrack  on "Timez Are Weird These Days" that incorporates his love for Ameria.  "I watched Gaspar Noé's I Stand Alone and it took me three nights to watch it," he tells Wired. "Every night I would watch 30 minutes of it. It was brave, it was searing, very hard but exciting to watch."

"The next day in the studio I started writing the record. I felt like I had to rep U.S.A. Being and standing alone in this world. 'I Stand Alone' is my favorite record on this album," he adds. Download the track on his web site (quick registration required).