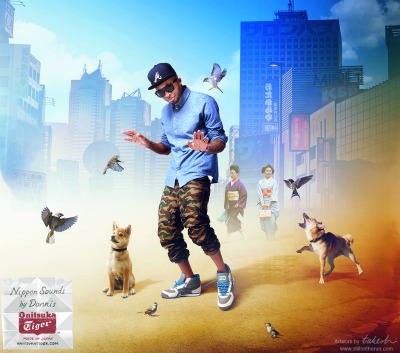 Emerging Atlanta MC Donnis teamed up with Japanese sneaker brand Onitsuka Tiger as part of their new Made Of Japan advertising campaign. The initiative pairs Donnis with up and coming Japanese producers De De Mouse, Joe Iron and Taku Takahashi to record a promotional EP to invigorate the authentic spirit of the Onitsuka Tiger brand. The EP aligns the classic sports brand with progressive Japanese beats and Donnis' fresh flow that neatly spotlights his lyrical prowess.

Even though Donnis hails from Atlanta, GA, the 25 year-old artist has a deep connection with Japan. While stationed in Japan with the U.S. Air Force, Donnis immersed himself in Tokyo’s vibrant music scene and started producing his mixtapes and demos. After gaining fame in and around the air force base, Donnis received the attention of  DJ Masterkey, who helped him land high-profile opening gigs for visiting hip hop acts from the U.S.

Dubbed "Nippon Sounds," the free collaborative EP features original music and remixes from Donnis that bring Atlanta and Japan together in a unique, cross-cultural way. "Nippon Sounds" will be released on a limited-edition USB cassette tape that is a pretty darn cool way to package new music. (See a photo of it here.)

Check out a free MP3 download of "All I Need" that was produced by De De Mouse and Luke Walker, and which received a poppy remake by Baby's Star. Firmly anchored in hip pop, Donnis doesn't hesitate to innovatively bend the genre and incorporate contemporary electro stylings to create a glowing slow jam that packs a universal punch. ("Nippon Sounds" will be released this week. Download it on Bandcamp.)