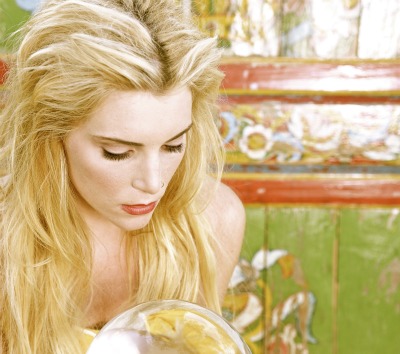 Dubbed a "nova star in the electro-pop galaxy," NOVI (aka Carolyne Neuman) hails from the small-town of Ashland, OR and is now expanding her horizons in Los Angeles. These two cities have influenced her tremendeously and are a perfect metaphore to describe her genre-mashing brand of pop that beautifully unites the charm of her small-town upbringing with the edgier elements of big-city Los Angeles.

Check out a totally guilt-free MP3 download of NOVI's debut single "Blackbirds" that is taken from her forthcoming EP, titled "Now I'm Here," that is scheduled to be released this fall. This head-turning tune is a totally fun pop ditty that features her honeyed vocals and a tapesty of sounds, ranging from the lush, looping guitars to punchy rhymes, and from a steady bass groove to those quirky bells & whistles that will put a smile on your face.

NOVI recorded her debut EP together with Lee Miles (Oh My Stars, The Red Jumpsuit Apparatus, Puddle of Mudd, Tickle Me Pink), and the effort was mixed by none other than Brian Malouf who previously worked with people like Madonna, Michael Jackson and Prince. Fans of Imogen Heap and other sweet, folky pop will be in for a treat.