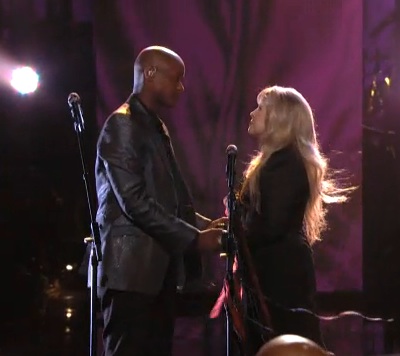 Freshly-crowned NBC The Voice winner Javier Colon didn't have his strongest showing during the final performance of his original song last night, but tonight the singer redeemed himself when he dueted together with none other than Stevie Nicks. Together they performed her classic "Landslide" that was turned into a beautiful new rendition that showcased Colon's soulful vocals and Nick's timeless, one of a kind delivery. Maroon 5 frontman Adam Levine was visibly moved by the duet that had him fighting tears.

Based on the strength of her original song, my money was on contestant Dia Frampton to take the top prize while my hope was that Beverly "real dog" McClellan would be the show's first winner. But America voted for Colon in favor of Frampton even though the final two had almost an equal amount of votes according to show host Carson Daily.

For the past couple of days, I have been discussing NBC The Voice on national Dutch radio 3FM. The Voice is a Dutch concept that first premiered in The Netherlands last summer. The Dutch are mighty proud that the program is now having international success. If for whatever reason Javier Colon does not resonate in a big way in The States, I'm sure the Dutch are glad to have him and sing his praises all the way to the top of the charts. Watch Javier Colon's performance with Stevie Nicks after the break