arjanwrites.com: [VIDEO] Coldplay Premieres Video for "Every Teardrop Is A Waterfall"

[VIDEO] Coldplay Premieres Video for "Every Teardrop Is A Waterfall" 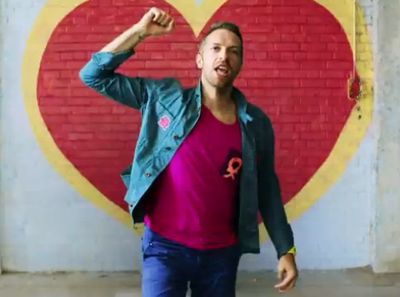 Fresh from their headlining set on Saturday night at Glastonbury, Coldplay just released the video for their new single "Every Teardrop Is A Waterfall" earlier this morning. Partly filmed in downtown Los Angeles, the video stays true to the song's escapist lyrics, bright melody and uplifting message with an abundance of splashing color, glow in the dark scribbles and fast-moving stop motion animation.

The video's (seemingly) simple production neatly contrasts with the song's grand, atmospheric sonic stylings with universal and blissful lyrics about hope despite adversity that will turn every sad summer day into a soaring one. "Turn the music up, I got my records on," lead man Chris Martin sings. "Maybe I'm in the black, maybe I'm on my knees, but my heart is beating and my pulses start. Don't want to see another generation drop, I'd rather be a comma than a full stop." Watch the video after the break.