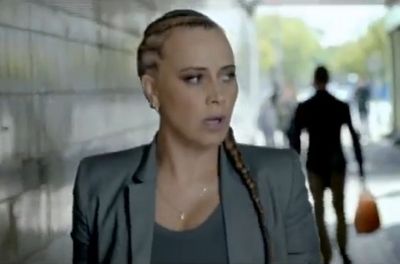 Leave it up to Dutch pop rocker Anouk to shake up the status quo up once in a while. After serving up a bloody album cover and sharing her candid opinions on Twitter, her fans know that Anouk doesn't shy away from a little controversy to get her point across. And the graphic new video for her excellent new single "I'm A Cliche" is a good example of that.

Directed by Dana Nechushtan and filmed in the streets of Amsterdam, the video for "I'm A Cliche" shows Anouk roaming around the Dutch capital and getting violently hit by cars and shot in the chest. But the singer has more than three lives and continues her walk around town while soulfully belting out her excellent new tune (that she wrote and produced with Ryan Leslie). "What's going on, what the hell is going," she sings and wonders, trying to make sense of the madness around her.

This fantastic new video wasn't made just for the sake of shocking viewers. Quite the opposite actually. The video for the song is a poignant social commentary about some of the absurd and narcissistic qualities of our modern society that often favors pointless sensationalism over common sense. Anouk's keen point of view is illustrated by accident bystanders who are more concerned about snapping cell phone pictures of a terrible tragedy than calling 911.

Even tough MTV censors will be scratching their heads and surely will have a hard time figuring out what to do with this video, it once again shows that Anouk likes to stir things to have people pay attention for all the right reasons. But don't be alarmed, this mama bee doesn't sting deep. It's just a little pinch to give you some food for thought. Mission accomplished. (Watch the video after the break. Warning: May be graphic to some younger viewers.)