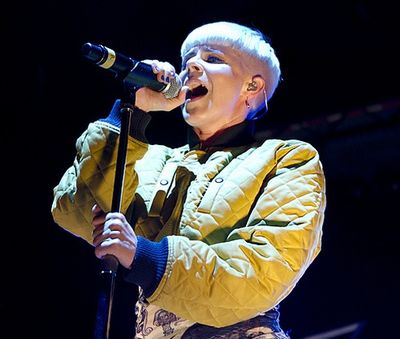 A few hours prior to her show with Katy Perry last night, I spent some time with Robyn in Atlanta to film a brand-new Cherrytree Pop Chop episode that will air very soon. (Check out some backstage photos from the Katy Perry show.)

Robyn and I had lots of topics to discuss, but we ended up chatting mostly about her single with Rye Rye that was released this week, the (leaked) video for "Call Your Girlfriend," plus we talked a lot about her creative process and life on the road.

Right on the verge of mainstream success in America, Robyn's main focus is to tour the States and make many new fans. She is not writing or thinking about any new music. "I'm taking a lot of things in and I'm keeping notes about my experiences, but I'm not creating any new music," she told me. "When I'm touring that's all that I can think about."

To cope with the frenzy of life on the road, Robyn loves to unwind by skyping with family back home and watching videos on YouTube to have a good laugh or to get pumped with German techtronic videos that she's obsessed with right now.

Before Katy Perry took the stage for the very first show of the U.S. leg of her world tour, Robyn performed a fantastic 30-minute set with her full-band on Perry's stage. Many people in the audience didn't seem all that familiar with Robyn, but boy, did she work it out. The Swedish pop pixie jumped around the stage throwing around some killer dance moves to energize the crowd. (Setlist after the break.)

Instead of going for the tried and proven, her set list was put together to be edgy and unexpected, taking the audience from pulsing dance beats to sweet melodies like only Robyn can. She kicked off with a non-stop tour de force performance of "Fembot,""Bad Girl" and the punchy "Cobrastyle" that had people hopping along.

The amped up set hit a smooth, melancholic moment with "Dancing On My Own" that was followed by "We Dance To The Beat" and "Don't F*cking Tell Me What To Do" to keep the energy up.

The singer even took a moment to eat a banana and throw the peel into the crowd. So fruity.

Robyn gave the crowd a solid feel for her powerful pop sensibilities by performing "Hang With Me," "Indestructible" and her new single "Call Your Girlfriend."

Robyn closed the show with her U.K. #1 hit "With Every Heartbeat" that had the arena (that was filled to capacity at that time) really curious and hopefully anxious for more.

I caught Robyn after the show backstage and she was really happy with the response of people. "It is good if you have to work for it," she smiled.

If you're seeing her in the next few weeks in a town near you, make sure to get there early not to miss a single second of her show. 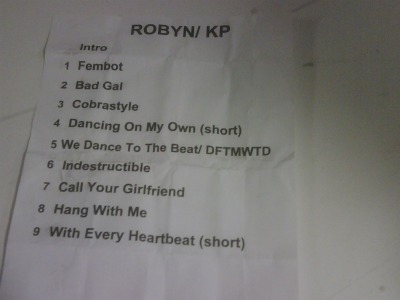