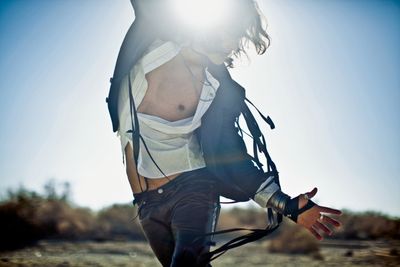 It sure takes a dose of musical courage to take on one of the biggest rock ballads of all time. But Zander Bleck doesn't shy away from a challenge and was eager to cover The Moody Blues' evergreen "Nights In White Satin" on a rainy night after a long recording session in the studio.

People were instantly captivated when they saw the footage of the charismatic New York pop rocker perform this timeless tune that neatly showed off his larger than life vocals, which perfectly set the tone for his own music.

In a pop world dominated by hip hop and dance, Zander Bleck takes his inspiration from classic rock to serve up a fresh new sound. The singer's forthcoming debut single "Temptation" clearly demonstrates his rock edge while also incorporating a pop-savvy, ready-radio melody and his emotive delivery that will have a mass appeal.

Bleck's knack for melody should come as no surprise. His tightly produced brand of pop is courtesy of none other than GRAMMY winning songwriter and producer Red One. As most of you pop fans know, Red One has been a driving force behind the careers of people like Lady Gaga and Kat DeLuna, and more recently he has been penning hits for Enrique Iglesias, Jennifer Lopez and Usher.

You can preview Bleck's debut tune "Temptation" on his web site now. In the meantime, check out an exclusive remix of Hype Jones' remix of Zander's "Nights In White Satin" to keep your iPod buzzing until more Bleck music will be released. Follow Zander Black on Twitter and Like him on Facebook.