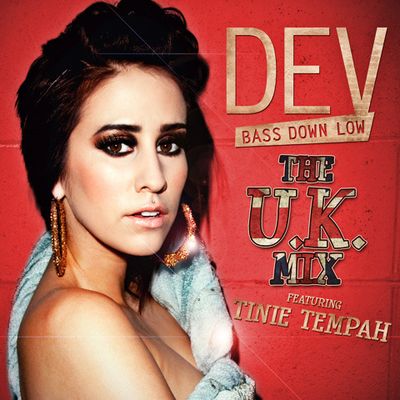 The world is falling head over heels in love with Dev. After the impressive success of "Bass Down Low" in the U.S. and touring with Usher across the States last month, the L.A. singer is now also gaining steady momentum overseas. "Bass Down Low" is rising to the top of the pop charts in the U.K. plus she will be touring around Europe this summer to play festivals and perform at TV shows.

Meanwhile, fans in North America can enjoy her new single "In The Dark" that is taken from her debut LP "The Night The Sun Came Up" that will be released on Universal Republic on September 20. Dev will also have a feature on Martin Solveig's new album "Smash" that will be released in different parts of Europe on Monday.

U.K. superstar emcee Tinie Tempah is showing support for Dev with his subtle reflip of "Bass Down Low" that first appeared on one of his new mixtapes and is now included on a brand-new "Bass Down Low" remix EP (download) that is available in the U.K. The Cataracs' slapping production remains intact, but Tinie added a few rhymes to the original to give it that grimey London touch. Listen to it after the break.