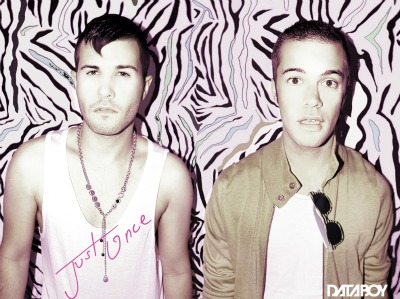 Databoy's happy-go-lucky "Just Once" is one of those poptastic ditties of the guilty pleasure kind that will have you bopping along the second it hits your ear buds. I guarantee you. So who are these two Databoy dudes? The duo is the teaming of Cameron Maxwell and Adam Bailey who I first met at a Lights gig in Austin, TX at South by Southwest back in 2010.

Since then, the two friends have moved from Texas to the New York City to focus all of their efforts on writing songs and getting their music heard. Recently, they premiered a bunch of new track during my Superfraiche Pop Show in New York City alongside the happening pop of Sky Ferreira and Simon Curtis.

Just in time for the summer season, they now deliver the splashy "Just Once." The duo writes me, "We first performed this song at a pool party with just a piano and kick drum and people loved it!" The final edit of the track was mixed by legendary soundboard master/producer Tony Maserati (Beyoncé, Black Eyed Peas, Britney Spears, Jason Mraz). It is the first track taken from their forthcoming mixtape that is out in July. Get ready to completely, totally and utterly pop out to "Just Once."