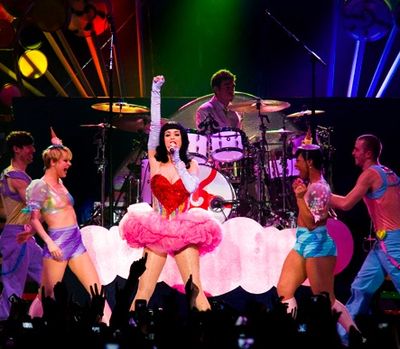 Chart sensation Katy Perry kicked off the U.S. leg of her California Dreams world tour in Atlanta, GA last night. A crowd of predominantly girls, gays, kids (and their parents) packed Gwinnett Arena to see the teen pop queen perform. (Check out some backstage photos from the Katy Perry show.)

After Swedish pop singer Robyn opened the show with a dynamic 30-minute set, Perry pal DJ Skeet Skeet worked the turntables on stage with a banging blend of fun top 40 hits to warm up the crowd for Perry's show. (Skeet Skeet had me humbled by giving me a massive shout out on stage. Thanks man, that was incredible!)

At 9 p.m. sharp, Perry took the stage hitting an immediate high point with her performance of "Teenage Dream." A string of hits followed, including "Waking Up In Vegas," "You're So Gay," "I Kissed A Girl," "Last Friday Night" and a very suggestive (yet tasteful) "Peacock." Perry took on every song and performance with cheer and gusto, and sounded pitch-perfect everytime.

Directed by Baz Halpin, the stage is a feast for the eye with candy props everywhere, including dancing gingerbread men, giant lollipops, tonnes of whipped cream, candy canes and plenty of other candy references. And yes, there were even machines blowing candy cotton scent into the audience to create a full-on sensory experience.

It was the perfect backdrop for Perry's self-assured, candy-coated brand of pop that she packed with an adult sense of humor and plenty of wit that made it a show appropriate for all ages.

Some of the show's highlights included the clubby "E.T." with laser beams running across the stage and a futuristic lyric video projected on three giant screens, the endearing "Not Like The Movies" and a gritty rendition of "Circle The Drain" that was one of the few serious (and fitting) notes of the show.

Halfway-through her performance, Perry took a moment at the front of the stage to perform a few acoustic covers, including Rihanna's "Only Girl," Willow Smith's "Whip My Hair" and Rebecca Black's "Friday," while playfully interacting with the cheering audience.

After a high-energy and sparkly "Fireworks," the singer closed the show with a blow out performance of "California Gurls" with confetti and whipped cream splashed into the audience.