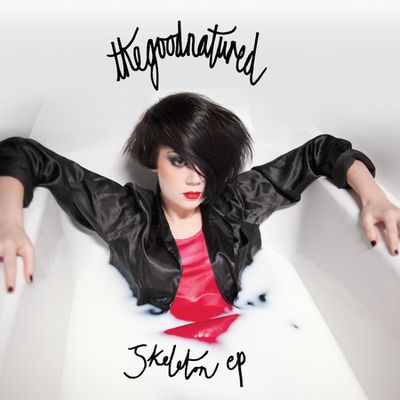 Emerging British "dark pop" trio The Good Natured returns with some brand-new material on their new EP "Skeleton" that will be released overseas on June 20. The group already gave us a taste of their eclectic sound when they released "Wolves" in the U.K. earlier this year.

The new single to go along with this new EP release is the effort's title track. And pop afficinados among you will be excited to learn that both "Wolves" and "Skeleton" were produced by Patrick Berger who previously produced Robyn's "Dancing On My Own."

This EP neatly shows off McIntosh development as a songwriter, displaying her mature command of serious pop music infused with sensual and emotional content that drives her lyrics. The title track "Skeleton" packs a raw passion with its frenetic rhythm section and glossy chorus that is nothing less than sheer brilliance. It's a perfect balance between sweet and crunchy. It's pop you gotta chew on to get the full flavor.

"Skeleton" describes the experience of giving up and letting go, taking off your mask and protection, leaving you with nothing to hide. "Rip it all off, give it all you got," she chants. McIntosh talks more about what drives her songwriting in my Cherrytree Pop Chop Minute interview I filmed with her at South by Southwest. Listen to "Skeleton" below and watch the video for the song on YouTube.