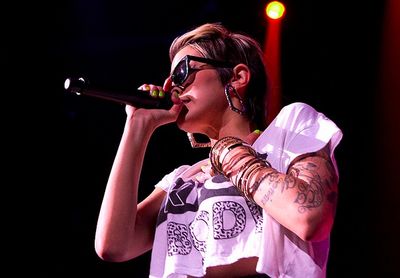 The meteoric rise of Dev is an amazing success story.  "A few years ago I was folding t-shirts at Old Navy and the other day Usher told me how cool I was," she tells the folks of CBS Radio in a recent interview that pretty sums up how she experiences her sudden fame.

Her triple platinum collaboration with Far East Movement on "Like A G6" has created a powerful platform for Dev to show her versatility and appeal as a pop singer. And with immediate result. Her single "Bass Down Low" is another chart smash on both sides of the Atlantic, and her new single "In The Dark" is shaping up to be one of the biggest radio hits of the summer. Fresh off her tour with Usher, Dev sat down with the folks of CBS Radio and spilled a few details about her much-anticipated debut album.

The title of Dev's debut album is "The Night The Sun Came Up" and the release date has been set for September 20. "It took me forever to come up with an album name," Dev explains. "I was so scared with coming up with something that is  going to define me, you know, that is going to reflect me for the next couple of years (. . .) but this felt right."

The album was produced by her pals of The Cataracs, but Dev reveals that she has also been working with none other than mega-producer Timbaland on tracks that will be included on the album.

Dev recorded most of the album in Costa Rica in early January. Hits like "Bass Down Low" and her new single "In The Dark" will be included, but the album will hold a few surprises as well to show different "textures and tempo."

One of her favorite tracks on the album is a song about her move from a small town in Northern California to Los Angeles. Staying true to form, "it starts out really soft, but then it switches to a really cool, hip hop sorta feel," she explains.

Dev will show different sides of herself on the album. "When it came to recording the album it was very important to me to show people that I can make "Booty Bounce" and I can make "G6," but there are other sides to me as well. I also have a heart and don't just pop out," she explains.