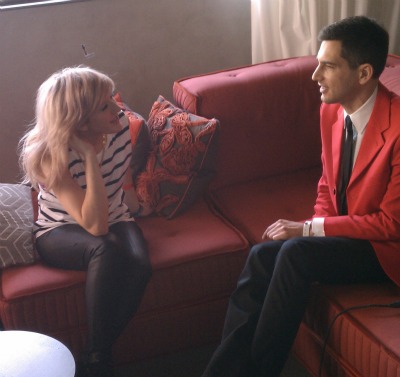 Chopping it up with Ellie Goulding in Austin

Every year, Austin's South by Southwest seems to become bigger and better. Traditionally the festival has been a mecca for lovers of indie and alternative rock, but over the years more and more great pop and urban acts are heading their way to Texas, which makes the event a lot more balanced and fun.

I had a great day yesterday racing around town to see shows, panels and film new episodes of Cherrytree Pop Chop Minute.

The day started with a stop at the HP SPIN Loft on 6th Street in downtown Texas. It is a really cool loft space where is HP is demonstrating some of their new products including the new HP TouchSmart (gorgeous wide screen) and the HP Envy 14 with Beats Audio technoloy, which makes the sound you play on your laptop so much better. I've been using one and I love it.

HP has also partnered with Spin Magazine to produce a web series that follows Young the Giant, Yellow Ostrich and Rural Alberta Advantage, and their road to SXSW. Catch new episodes every day on HP's YouTube Channel.

I was invited for a quick lunch at the Four Seasons Hotel together with The Naked & Famous. Great band who is blowing up on both sides of the Atlantic with their album "Passive Me, Aggressive You." Band was tired from trekking around the globe, but super excited about their success.

At the W Hotel we filmed two episodes of Cherrytree Pop Chop Minute. One with the lovely New Zealand electro pop artist Zowie (who turns out to be massive fan of The Knux) and the second one with Ellie Goulding who was on a tight schedule playing dozens of shows, but is oh-so excited to be in the U.S. to meet fans here.

I headed over to the PureVolume House for Idolator's "Pray For Pop" party with headliner OhLand. This was first time I saw the Danish artist play live and I loved every second to it. Dreamy pop with a punch, and a very exuberant stage performance.

Later that evening, I went over to The Ghost Room to see emerging British electro-pop artist Bright Light Bright Light who performed a fantastic set. Truly enjoyed it. The singer was accompanied by a drummer and keyboard player, and together they stirred up a dance party that took my right back to the '90s. He ended his set with new single "Disco Moment," which is excellent. Something to look out for.

Another highlight that evening was seeing The Knux at a special Billboard showcase. The group played a few brand-new tracks (including single "She's So Up") and crowd favorite "Cappucino." These two brothers have great energy on stage. Rock 'n roll of a new kind.