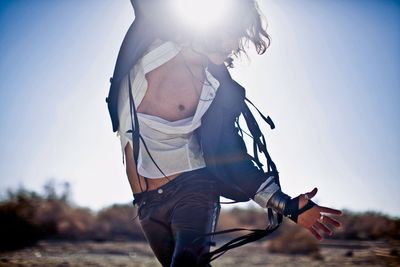 Zander Bleck. Remember that name. He's a massive new star on the horizon that you should know about now because it will only be a matter of time before he will be storming up the charts in a big, global and mighty way.

The charismatic New York pop rocker is turning heads with his enigmatic personality and chart-savvy sound that is dominated by his larger than life rock vocals. I had a lunch with Zander and his team during GRAMMY weekend and I was immediately struck by his passion for great music and poise to deliver something fresh to scene.

Bleck has that spark and swagger that stars are made of. And most importantly, he has the music to back up his promise.

Zander's rock-edged and tightly produced brand of pop is courtesy of none other than GRAMMY nominated songwriter and producer Red One. As most of you pop heads know, Red One has been a driving force behind the careers of people like Lady Gaga and Kat DeLuna, and more recently he has been penning hits for Enrique Iglesias, Jennifer Lopez and Usher.

Red One is building out his pop empire and has been developing three artists: Mohombi, Porcelaine Black and Zander Bleck. Mohombi is coming on strong with "Bumpy Ride" in different parts of the world, and the music of Black and Bleck will be unleashed upon the mashes very soon.

Head over to Vevo to see Zander Bleck perform an impromptu version of Queen's "Bohemian Rhapsody," a legendary tune that Bleck confidently makes his own. And I promise you, this is only the beginning. Also, check out a preview of "Temptation," one of his original tracks that was produced by Red One. Super catchy stuff. Zander is an artist to believe in. He's here to stay.