I'm thrilled to announce that after my SUPERFRAICHE shows in Los Angeles and Atlanta, I'm taking my SUPERFRAICHE pop showcase back to New York City! On April 1, I have invited Sky Ferreira, Simon Curtis, Databoy and She's The Queen to perform at my SUPERFRAICHE show that will be held at the dramatic, multi-level Galapagos Art Space in DUMBO, Brooklyn.

SUPERFRAICHE will be organized in conjunction with GUMBO one of the hottest dance parties in New York City that will follow SUPERFRAICHE. Get your dose of fresh new pop and then dance the night away. Get your tickets now.

Quick intro to some of these blazing fresh new pop acts you oughta know:

Sky Ferreira (link)
Confidence and charisma shine through the songs that 18-year-old New York based pop artist Sky Ferreira has been writing and recording for her upcoming Capitol Records debut.  The album is shaping up to be a sparkling collection of electronic pop tunes that combine lustrous melodies with spare and digitized productions by a host of hit-makers such as Bloodshy & Avant (Britney Spears/Kylie Minogue), Greg Kurstin and Dallas Austin.  Sky recently made Entertainment Weekly’s "11 to Watch in 2011" list, is the new face of Calvin Klein’s CK One global campaign, and can be seen in Tommy Hilfiger Denim commercials.  Her EP "AS IF!" will be released on March 22.

Simon Curtis (link)
With over one million downloads of his debut album, “8Bit Heart,” Simon Curtis has quickly become a force to be reckoned with in independent pop music.  He has single-handedly established himself as one of the pioneers of the new era of music industry and become, as MTV.com recently dubbed him, a true "internet sensation."  Simon has managed to captivate the blogosphere and leave his fans around the world in bated breath to see and hear what this former Nickelodeon star will bring them next.

Databoy (link)
Databoy is Cameron Maxwell and Adam Bailey, a 22 year-old duo originally from Austin, TX, currently residing in New York City.  Since their premiere show during SXSW 2010, DATABOY has done numerous performances and showcases in Austin and New York.  In addition to writing all of their own material, DATABOY penned Kim Sozzi’s (3 Billboard Dance #1′s) next single with Josh Harris (Seal, The Killers, Dangerous Muse) and are currently working with Cutfather (Kylie Minogue, The Wanted, Pussycat Dolls) and Enur (“Calabria”) on their own material.  Their debut single, “Stupid,” was released on February 22, 2011.

She’s the Queen (link)
She’s the Queen is an electropop band currently based out of both New York City and Philadelphia.  The group was formed in 2009 and is composed of producer Drew Kuryloski and vocalist Emily White. Once beginning their serious recording as a group, the duo recorded in Drew’s home studio above his garage.  The bands synth-heavy electro/dance rhythms and energetic performances have gained them a substantial global following.

Flyer after the jump. 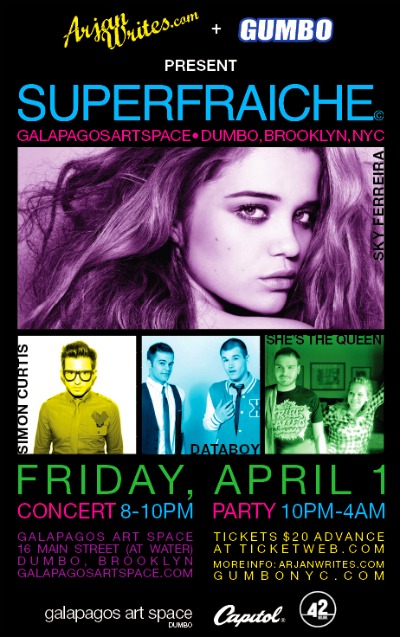