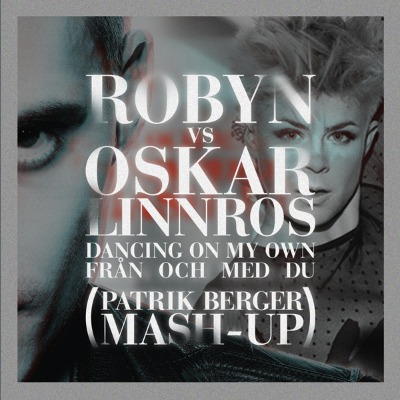 The Robyn goodness just keeps on coming this week. "Dancing On My Own" co-writer Patrik Berger produced a mash up of Robyn's tune with Oskar Linnros' "Fran Och Med Du" that was released in Sweden this week. (Click here to download it on iTunes.)

Linnros is one of the brightest local new stars in Sweden who has been performing a cover of "Dancing On My Own" during his live shows. Following the success of his solo debut "Vilja Bli," he received a Swedish GRAMMY for Best New Artist this week. Robyn sweeped the annual music happening in Stockholm by receiving four awards. The combination of these two songs give Robyn's phenomenal pop gem a fun and happy new twist that will give you butterflies.

On a related note, news dropped yesterday that Robyn will stick around a little longer in the U.S. after she finishes the second lag of her North American tour. Not only will she appear as a headliner on the Coachella Music & Arts Festival, she will also join Katy Perry on tour this summer. There's a good chance she will return to a city near you. Stay tuned for all the details and dates.

In the meantime, don't forget to grab your copy of "Body Talk" to support Robyn and push her to the top of the charts. It is currently on sale at Amazon.com for only $4.99. And if you already have a copy of the album, just get a few more to share with you friends and family. Share the good pop!