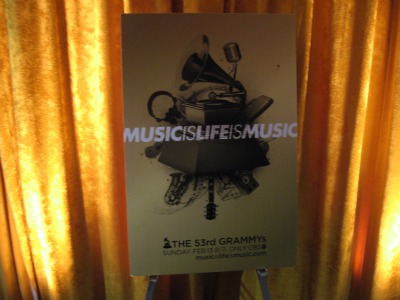 GRAMMY Season kicked off last night with the announcement of the 53rd GRAMMY Awards Nominees during the annual Nominations Concert on CBS. Marquee categories were announced during the live telecast, and immediately following the show all nominees were released to the public. I was GRAMMY's Roving Reporter, and if you followed me on Twitter and Facebook last night, you received all the minute by minute updates.

The night belonged to Eminem who grabbed 10 GRAMMY nominations, including nods for Record of the Year, Song of the Year and Album of the Year. An impressive comeback for the Detroit MC.

Newcomer Bruno Mars received an impressive 7 GRAMMY Nominations, including two nods in the coveted Record of the Year category for his collaborations with Cee-Lo ("Fuck You") and B.o.B. ("Nothin' On You"). He was also nominated for his production work with The Schmeezingtons.

Bruno Mars was visibly overwhelmed by the honor, wiping away a tear from his eye in disbelief. He noted that he was especially excited for Cee-lo's nomination, which is "one of the best productions" The Schmeezingtons have ever done.

Read my entire wrap up report after the jump plus get my list of biggest surprises of the night.

Cee-Lo told me he will be excited to be performing at the GRAMMYs again after his "monumental" performance with Gnarls Barkley. He is not sure if will perform the unedited version of the song. Record Academy chief Neil Portnow will let him, but it will be up to CBS on how they will air it.

Nominees in the Dance category will be heading for a big showdown as well. Robyn, La Roux, Lady Gaga, Goldfrapp and Rihanna are up for Best Dance Recording. Interestingly, Lady Gaga was not nominated for her mega-seller "Bad Romance," but "Dance In The Dark."

The pop singer is also up in the Best Dance/Electronic Recording category together with La Roux, BT, The Chemical Brothers, Groove Armada and Goldfrapp.

Producers RedOne and Dr Luke are both nominated for the Producer of the Year award together with Rob Cavallo, Danger Mouse and The Schmeezingtons.

Biggest surprises of the night:

Cee-lo's prominence in all major categories (which is well-deserved)

Janelle Monae not up for Best New Artist (she was eligble)

Ke$ha not up for Best Artist (hate her or love her, she was a chart staple)

What do you think of this year's GRAMMY Nominations? Share your thoughts.