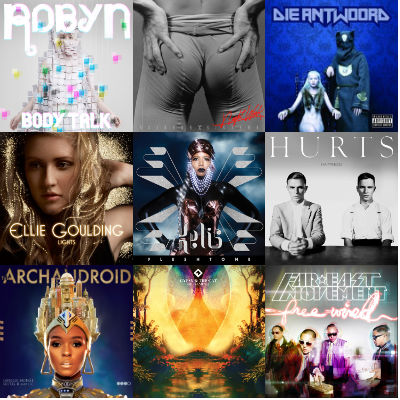 Many great, worthy albums, singles and songs were released by both familiar artists and exciting newcomers this year. Putting together my end of year album list was hardly an easy task. I ended up picking albums that I thoroughly enjoyed listenting to, but also albums that I believe will stand the test of time, and/or marked the poppin' sonic climate of 2010.

Many promising new trends emerged in 2011. One of the most exciting trends was the growing impact of alternative pop acts in the charts. Take for example La Roux. Bloggers went mad over the hair-whipping duo in 2009 and this year "Bulletproof" was all over mainstream radio. Seriously, that's an alt-pop victory introduced by bloggers everywhere. I'm confident that the success of artists like La Roux has paved the way for more great alt-pop acts to break through in 2011.

9.  Die Antwoord "$0$"
Die Antwoord's "$0$ is by far one of the most refreshing records of year. Raw, abrasive and in your face, Die Antwoord will have your dizzy on your feet from beginning to end. Genius production. (Buy)

8. Kelis "Fleshtone"
Kelis took dance and pop music to a new level of brilliance with the hard-hitting and gritty "Fleshtone." Unfortunately, the album failed to achieve momentum in the charts, but she made legions of new fans while maintaining her artistic integrity. (Buy)

7. Scissor Sisters "Night Work"
After their lackluster second album, the New York five-piece returned strong with a fusion of dance, pop and disco that was sexy, slightly raunchy but always right on point. Hopefully, their support slot for Lady Gaga's U.S. tour dates next year will introduce their down and dirty sound to many more people. (Buy)

6. Far East Movement "Free Wired"
"Free Wired" is not only an album title, it is a vision, a movement. It is about breaking down barriers and creating a sound that cannot be defined as one single genre. "Free Wired" is a super slick, tightly packaged effort filled with hits that is very now, very fresh. (Buy)

5. Gypsy & The Cat "Gilgamesh"
When I saw Gypsy & The Cat perform at One Movement in Australia, I was blown away by the lush, dreamy and hyper melodic qualities of their songs. This Aussie duo is one of the most exciting new acts to look out for in 2011.

4. Ellie Goulding "Lights"
Masterfully produced by Starsmith, Ellie Goulding's "Lights" is a warming, energizing and touching blend of folktronica that is dominated by Ellie's one of kind vocals that get me every time.

3. Hurts "Happiness"
The duo of Theo Hutchcraft and Adam Anderson were able to package doom and gloom, and turn it into a moving synth pop sound that fit the times. Comparisons with Erasure and Pet Shop Boys aside, Hurts delivers an introverted synth pop sound that is distinctly different and uniquely their own.

2. Janelle Monae "The ArchAndroid"
I remember seeing Monae perform for a crowd of 20 people almost three years ago and I was convinced I was looking at one of the biggest new stars of our time. After her taste-making EP, she finally released her debut LP that is nothing less than phenomenal. It's a perfect marriage between style and substance that is truly one, singular experience. In a time when the emphasis on singles seems to be the norm, Monae delivers an album journey that will move you. (Buy)

1. Robyn "Body Talk"
In 2010, Robyn returned to the scene with more spunk and gusto than ever. Universally-loved and critically-adored, Robyn's triumphant "Body Talk" has solidified her position as the reigning Queen of Alternative Pop. Her bittersweet lyrics, hyper catchy melodies and multi-layered, crisp productions expose one of the most innovative artist of our time who is not afraid to take chances. She's a role model in more than one way who never ceases to amaze me.  (Buy)