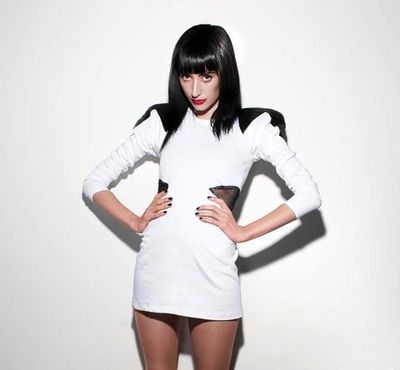 While in Sydney on Sunday, I received the full scoop on emerging New Zealand pop phenom Zowie who is heading statesside to perform showcases in Los Angeles (on Friday) and New York City (next week at CMJ). (Check for dates and times after the jump.)

The Auckland singer has already received a steady amount of buzz at home having performed at some of the country’s biggest festivals (Big Day Out, Rhythm And Vines) as well as performing opening sets for the likes of The Kills and Peaches. Her debut single "Broken Machine" was an instant hit on the New Zealand, rising to number 5 on the pop chart last month.

Starting out as laptop-savvy bedroom maestro, the self-made Zowie was obsessed with making beats. Big fat ones, hot vintage ones and buzzing electro ones. Give her a beat and she will put her own swing to it.

Zowie's production of stomping rhythms led to further experimentation with melodies and vocals, which resulted in an eclectic brand of DIY electro-pop that has a steady crunch to it that you'll want to sink your teeth right into. Seriously.

Check out a guilt-free download of Zowie's "Broken Machine" that was produced by my pal Andre Anjos. The remix is taken from Zowie's single EP that also includes the single edit plus the Computers Want Me remix. Grab the RAC's chunky remix now. It is beyond excellent.

Plus, Zowie will do a PA at Splash Bar on October 21.