Free MP3 Download: Gypsy and The Cat “Time To Wander” 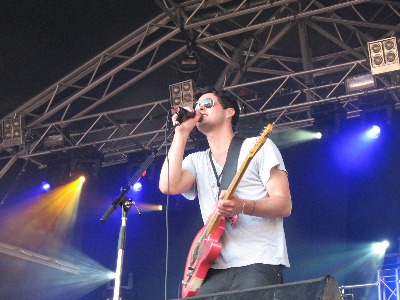 The One Movement Conference and Festival in Perth, Western Australia has come to a close with a weekend full of great performances in one of Perth’s gorgeous waterfront parks.

Australia is buzzing with great talent, from pop to indie to electronic, and it was great to hear, see and discover many new Australian acts over the last week.

One of stand out shows from this weekend’s festival was an impressive 30-minute performance by Melbourne newcomers Gypsy and The Cat. The duo is the fresh teaming of 21-year-old Xavier Bacash and Lionel Towers who only began making music together in a garage in Melbourne less than a year ago.

Aussie indie radio station Triple J got a hold of one of their early demo tracks, and put the song in full rotation. London indie label Young & Lost was quick to secure the release of the group’s debut single, “Time To Wander,” in the U.K. That led to interest from the big and mighty Sony Corporation who promptly signed the group to a coveted worldwide deal a couple of weeks ago for international distribution.

And Sony’s rapid support should not come as a surprise. Gypsy and The Cat serves up a warming blend of melodic pop that is set in grand electronic soundscapes that is influenced by acts ranging from Fleetwood Mac and Jeff Buckley to the innovative electronic sounds of Daft Punk and Justice. It is gorgeous, premium class pop that could potentially go a very long way.

Gypsy and The Cat "Time To Wander"