arjanwrites.com: A Few Words About the MTV Video Music Awards

A Few Words About the MTV Video Music Awards 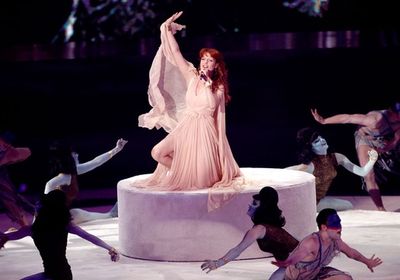 Florence and The Machine showed MTV viewers last night what the MTV Video Music Awards needs more of. Instead of wasting valuable airtime on fabricated feuds, poorly lipsynching teens, flash in the pan reality TV personalities and autotuned pseudo artistry, the show needs more left-field performers who, and here it comes, can actually sing live and bring something fresh.

This year's VMAs were a bit of a snore that lacked any memorable sizzle. By moving the show to a larger, multi-functional venue in Los Angeles, the VMA producers were able to build a larger set with the plan to accommodate bigger, better and bolder performances.

But that vision backfired. In fact, quite often, the show's impressive, futuristic set was more compelling than the artist it featured.

Big exception was newcomer Florence and The Machine who delivered a stellar performance with powerful vocals and an exuberant stage show that was highlighted by fantastic camera work. It was a career-defining moment for the British singer that has everyone talking today.

The much-anticipated performance of Robyn was unfortunately cut short and we only got to see about 30 seconds of a remixed version of "Dancing On My Own" before it was harshly cut to commercials.

Fitting was Linkin Park's outdoors performance at the Griffith Park Observatory which was visually compelling to watch just as the sun was setting over the Hollywood hills. It was the perfect backdrop for their larger than life, epic sound.

The appearance of B.o.B. with Bruno Mars and Hailey Williams was frenzied and did not show off the talents that they truly are.

Overall this year's VMAs almost seemed a re-make of last year's show with many of the same artists and performers. Hopefully, we can look forward to a slew of fresh new faces at next year's show who can up the excitement.

Lady Gaga was once again the show's big winner, taking Moon Man statues in all major categories. It was good to see here accompanied by her main producer RedOne, the man who is driving force behind her chart-topping sound.

And the star had her gay fans rejoice when she took awards from the giddy cast of GLEE and none other than the inimitable Cher at the end of the night. And if the VMAs are any indication, we may see a lot more of the superstar entertainer at the GRAMMYs early next year.