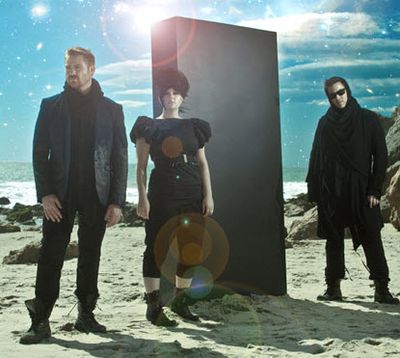 This hot little track by L.A. synth pop band Human Life has been floating around for the past few days so grab it while it is still hot. This emerging SoCal trio is the teaming of veteran house music producer Joshua Collins, Matt Wasley and Rachael Starr who are currently preparing the release of their next single "Wherever We Are" on their own Life X Records on November 1. The remix EP will include revamps by Grum, Lovers and Gamblers, Manare and Minitel.

Influenced by classic French and Chicago house and pop music as diverse as Genesis, Toto and Depeche Mode, Human Life's sound is an invigorating blend of contemporary electronic sounds and production techniques. "Italo Crimewave" is a good exampe of the group's "French touch influenced electro-pop." The song can easily be mistaken for a long lost Giorgio Moroder 80’s soundtrack with its glittery soundscape and dirty synth pumps.