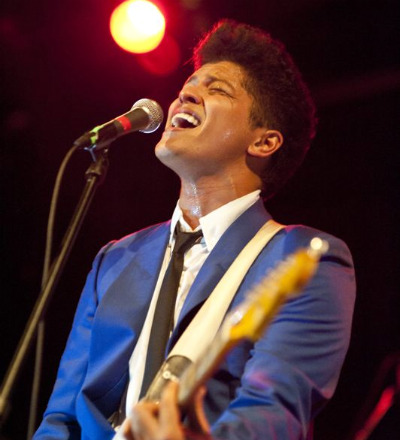 It was only up until a few months ago that Bruno Mars and his pals played bars and small clubs across California for "a dollar and a slice of pizza." But his life as a vagabond troubadour was instantly turned up side down when he recorded "Nothin' On You" with B.o.B. and shot straight to the top of the global pop charts.

His success with "Nothin' On You" was followed by "Billionaire," another smash collaboration that Mars recorded with Travie McCoy. His appearance on these two hit tracks also spotlighted his achievements as a songwriter, including tracks that he wrote for Flo Rida, K'Naan, Adam Levine, Sugababes and Mike Posner. More recently, the Hawaii-born crooner co-wrote Cee Lo Green's phenomenal "F**k You."

After being featured on other people's songs, Mars recently stepped into the limelight as the lead singer of his own material. On Wednesday evening, all of Mars' hard work, hopes and dreams finally led to his first-ever headlining show in New York City.

His gig at Bowery Ballroom kicked off a series of shows in the U.S. and overseas to promote his much-anticipated debut LP "Doo-Wops & Hooligans" that will be available October 5 on Atlantic/Elektra Records.

Combining style, soul and swagger (and freshly coiffed as a modern-day Elvis), Bruno Mars truly impressed by showing that he is not only a gifted songwriter, but also a charming, charismatic showman. He owned the stage, had the crowd cheering along and he visibly enjoyed every single second of it. 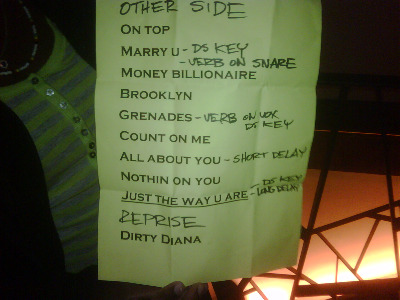 Mars and his bandmates played a mix of new songs from his forthcoming debut, tracks from his "It's Better If You Don't Understand" EP and savvy remakes of his hit collaborations.

He started his with a downtempo version of "The Other Side," which was by followed by "On Top" (the first song Mars wrote with his Smeezington partner Philip Lawrence) and  "Marry U." He then played a special version of "Billionaire," his collaboration with Travie McCoy that was introduced by a remake of '80s smash "Money (That's What I Want)" by the Flying Lizards and first performed by Barrett Strong.

Impressive was his performance of the gritty "Grenades" that is slated to be a single track, and is very good.

The crowd sang along when he performed his current single, "Just The Way You Are," which is currently racing up the charts.

Mars gave a special introduction to "Nothin' On You," the song that turned him into a bonafide pop star. "These four chords changed my life," he smiled, while also giving a shout to his Atlantic team up in the VIP section and thanking them for signing him.

The singer encored with a rocking version of Michael Jackson's "Dirty Diana," which underlined his versatility as a singer and performer who can easily move from soulful ballads to hard-rocking pop tunes.

Bruno Mars' very first headlining gig in New York City demonstrated that this rising star is a fresh new voice to be reckoned with. In a crowded pop scene that tends to favor style over substance, his music emphasizes what truly defines great pop music - a strong melody combined with a heartfelt message that is universally understood.