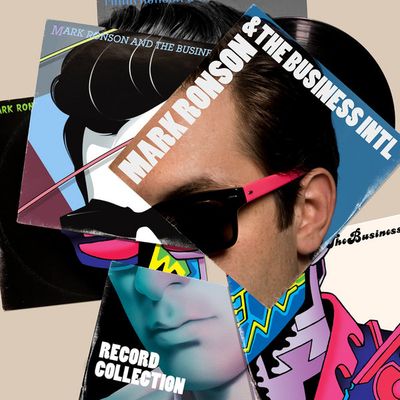 Check out the album art for Mark Ronson's new LP "Record Collection" that includes a not-so-hidden nod to Duran Duran's 1982. "Rio." In fact, Ronson has not made it a secret that much of his so called "synth & synthability" new album is inspired by the work he did on Duran Duran's forthcoming new record.

"I was working with Nick Rhodes, and when I heard the sound of these analogue keyboards I thought they would be an interesting texture to incorporate into my new album," he explains in an interview with the BBC.  "Working with Duran Duran is directly responsible for the sound on this album - although it doesn't sound like Duran Duran."

Watch the video for his new single "Bang Bang Bang" featuring rapper Q-Tip and singer MNDR (aka Amanda Warner) after the jump to get a taste of the new synthy Ronson. Scheduled to be released in the U.S. on October 5, "Record Collection" features a slew of collaborators including Simon LeBon who contributes vocals to the record's title track and Boy George who sings on the Cathy Dennis-penned "Somebody to Love Me."