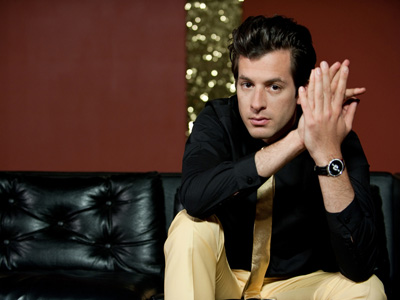 Producer Mark Ronson bounces back on the scene with his latest greatest "Bang Bang Bang," a beyond excellent, retro-styled synth hop joint based on the French nursery rhyme "Alouette." The track features his pals rapper Q-Tip and singer MNDR (aka Amanda Warner).

Soundboard meister Russ Chimes turns Ronson's original into a blazing dancefloor stomper that will have you tapping along right from the first instant - whether you want it or not. There's simply no denying a banging Chimes workout.

"Bang Bang Bang" is taken from Ronson's new LP, titled "Record Collection," that will be out in September. The album consists entirely of original material, bringing together the songwriting skills of Nick Hodgson, Jonathan Pierce (The Drums), D’Angelo, Alex Greenwald and Cathy Dennis, to name just a few. In an interview with the BBC, Ronson explains that his recent work with Duran Duran has inspired his more synth-driven sound. "I was working with Nick Rhodes, and when I heard the sound of these analogue keyboards I thought they would be an interesting texture to incorporate into my new album," he explains.

"There's no covers, no horns. Working with Duran Duran is directly responsible for the sound on this album - although it doesn't sound like Duran Duran."