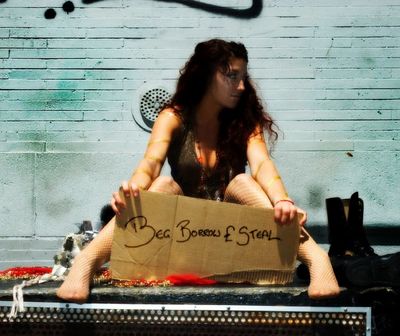 I first alerted you about Neon Hitch back in 2008 when she first hit the scene with the Furtado-esque "My Book." Now, Amy Winehouse's former flatmate returns with a catchy cover of Snoop Dogg's "Drop It Like It's Hot, which received two thumbs up from Snoog himself.

Muse to producer Benny Blanco (Kelis, Santigold, Katy Perry, Britney Spears), she is not only a precocious performer but also a gifted songwriter who recently co-wrote Billboard charting tunes for Ke$ha’s ("Blah Blah Blah") and 3OH!3 ("Follow Me Down").

Karo DioGuardi recognized Hitch's talent and signed her to her Warner Brothers imprint. Currently, the daughter of traveling street performers is working with Blanco to record tracks for her big label, full-length LP tentatively titled "Beg, Borrow & Steal" that is scheduled to be released in 2011. Hitch brings plenty of street cred and a unique point of view that will take her places - to the top of the charts to start with.

Neon Hitch "Drop It Like It's Hot" (Snoop Dogg Cover)